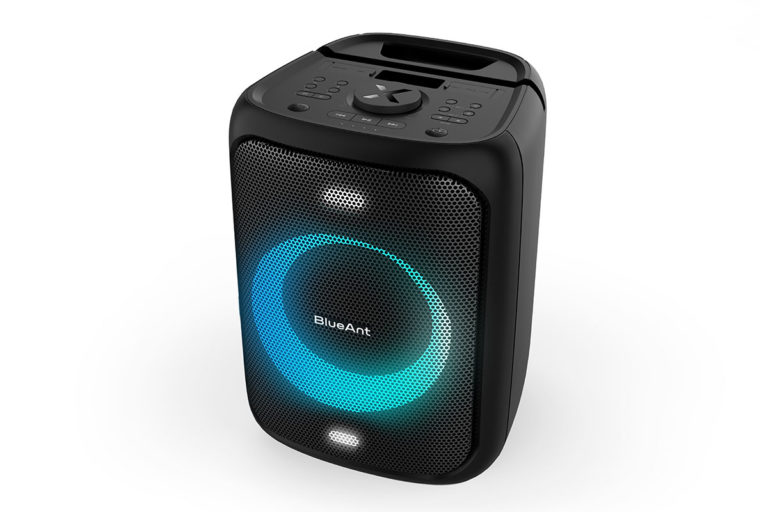 About the BlueAnt X5

Well, the theme is common enough: Bluetooth plus built-in battery plus amplifier plus speaker, and you have a portable Bluetooth speaker. But this is a biggie as these things go. It stands 360mm tall, 260mm wide and 270mm deep, more or less. And it weighs a respectable 4.2 kilograms.

The Bluetooth is version 5.0. The battery is rated at up to 20 hours playtime at half volume. But it can run continuously on the included 9-volt, 18-watt power supply. BlueAnt says that it is a “60-Watt Bluetooth Party Speaker”, but the power output of the Class D amplifier is specified as 2 x 10 watts (“RMS”) at 10% total harmonic distortion. It comes with two drivers: a 59mm (2.25-inch) tweeter and a 156mm (6.5-inch) woofer.

The case is a sturdy ABS. Don’t be fooled by the firmly fitting silicone stoppers over the connections on the top: the BlueAnt X5 speaker is not water resistant or weather rated. For one thing there’s a bass reflex port on the back which leads directly into the interior. (BlueAnt calls this a “bass vent inverter tube”. I bristled at this non-standard terminology for a moment, and then realised that the term is far more descriptive than the usual name. A good bass reflex design enhances the bass by employing the rear energy of the driver, inverting its phase as it emerges from the port.)

The woofer is surround by multi-coloured LED lighting – it really is a party speaker! These respond to the music, pulsating and spinning the colours around in various patterns. You have a choice of five modes, plus off. There are also two bright white LEDs, one above and one below the woofer, which flash in a strobe-like way, although they aren’t powerful enough to produce a real strobe effect.

On the top are the controls, including track skipping, play/pause, input selection, bass boost, and a button for cycling through the light modes. Oh, and level and control buttons for the two microphone inputs. There’s also an echo control for those. Four small LEDs show the state of the battery charge, while a display shows the input selected, and also gives feedback on levels when they’re being adjusted.

Under a silicone stopper to the left is a small USB service port and a regular Type-A USB port. You can use that to play back MP3 music from a memory stick (it doesn’t support iPhone playback) or charge up your device from the speaker’s built-in battery. To the right of the display are three inputs: two 6.35mm mono sockets for microphones and one 3.5mm socket as an auxiliary input. The input selector buttons choose between Bluetooth, auxiliary in and USB in. The microphones run in parallel so they can go at the same time as a music source. Karaoke, you know.

A slot across the width of the unit is suitable for hold upright or sideways a tablet or phone.

Weirdly, BlueAnt rates the frequency response of th X5 at 150 to 20,000 hertz. I say “weirdly” because it was clear from the first bars of music that it extends well below 150 hertz. Indeed, the tiny BlueAnt X1 has its peak output at just 110 hertz and the X2 has its peak at around 60 to 70 hertz. We’ll find out the real bass performance shortly.

The company also says that the can speaker produce an output level of more than 110dB. Ohhhkay, I guess.

A little extra with the BlueAnt X5

There were two cardboard accessories boxes included in the packaging. I pulled one open and was surprised to find a substantial-feeling microphone within. Cool, Karaoke or PA at no extra cost. I figured the other would hold the charger/power supply, which it did. And also another microphone. That’s pretty good value. The microphone cables are terminated with 6.35mm jacks, of course, to match the inputs on the BlueAnt X5. At the other end of the cables are XLR sockets, so you can switch to another dynamic microphone should you wish.

I think the microphone bodies are plastic, although I couldn’t be certain without scratching the surface. I assumed that the grilles were also a hard shiny plastic, until I noticed that they were attracted by a magnet. So they were some kind of steel. The grilles unscrew, revealing a substantial microphone capsules within.

Initially there was a lot of buzz and noise when I plugged in a microphone and turned up its volume. It turns out that the microphones were picking this up from the power supply, which was plugged in at the time. Running the speaker from battery, there’s almost no noise until the volume was maxed out, and even then it was modest.

The maximum gain available with the microphones wasn’t particularly high. So the speaker can’t really used as a P.A system for a timid person with a quiet voice. But when I screwed up my courage and tried blasting a few loud syllables of my own, the results were pretty satisfying.

The BlueAnt X5 doesn’t really sound like a portable Bluetooth speaker. That’s because it kind of sounds like a real speaker. The tonal balance is quite even, with nicely balanced mids, bass and treble. The bass extension is satisfying, covering most of the drum kit and most of a bass guitar.

Things like cymbals tick nicely, without excessive levels adding any harshness to the sound.

Of course, the BlueAnt X5 is entirely mono and that tends to pinch in the sound a little. But the fact it, for its intended purpose of being a portable party speaker, it delivers much higher quality sound than you’d typically expect. Apparently the BlueAnt X5 will operate in “Duo mode”. Buy two and they can operate as left and right stereo channels. A couple of buttons on the top are provided to manage these links. Obviously I didn’t test this.

I’d suggest putting it up reasonably high. It tends to be a little muffled down towards the ground. Stick it on a table or similar, especially if there are a lot of human bodies getting in the way. That said, having it down on the ground does tend to enhance the bass a little.

It’s quite long. The speaker does not switch itself off after a certain time. To which I say: “Hooray!” Because that means you can leave it plugged in and connected to some device, and just start playing music whenever you like. If you’re running of battery, remember to press the power off button. I didn’t remember. I ran the speaker hard for about six hours, then I went to bed. When I came into the office the next morning, I saw that the colourful lights were still on and the battery indicator was showing two LEDs (out of four). Well, I might as well just leave it on. About six hours later the speaker switched off the colourful lights, started flashing the one remaining battery level LED and announced that the battery was nearly empty. I’d say it was about 22 hours all up.

Frankly, I thought the “110+ SPL output of Dynamic HQ Audio” claim was pretty unbelievable. As in, I did not believe it. And, of course, I was right. That said, the BlueAnt X5 speaker does go ridiculously loud, and remains moderately clean while doing so. To test, I played Rage Against the Machine’s self-titled album through the speaker with the volume turned up to the maximum. Full blast, in other words.

The standard range at which you measure loudspeakers is one metre, so I placed my SPL meter at that range. I set it to the C-weighting rather than the default A. C is more representative of music. At the loudest parts, the meter nudged 98dB. No, that’s not 110dB. But it is flat-out loud. Pushing the meter in to just short of touching front grille, the level topped out at 104.5dB.

As far as portable Bluetooth speakers go, this is knock-you-down loud!

As for the bass output. Remember BlueAnt claims a mere 150 hertz of bass extension? Of course, it did much, much better than that. I close measured at the front of the woofer and also at the bass reflex port at the back. I ended up leaving it in Bass Boost mode. The main effect of that was to add a few decibels down near 40 hertz where things were starting to fade away anyway.

So, with Bass Boost and measured at the front, the output was almost ruler flat from 100 hertz to 750 hertz (forget about any of the high frequencies you see on the graph – the microphone was nowhere near the tweeter so they’re not valid). From 110 hertz the output reduced to be about 6dB down at 61 hertz. At the port, the output was even from 46 hertz to 77 hertz, adding some useful bass extension.

It’s summer now and the BlueAnt X5 speaker is a fun way to enjoy your music outdoors. Just a reminder that BlueAnt, which is based in Melbourne, is no fly-by-night business. Looking back through our archives, it turns out that we’ve been reporting on some of its gear for almost fifteen years.