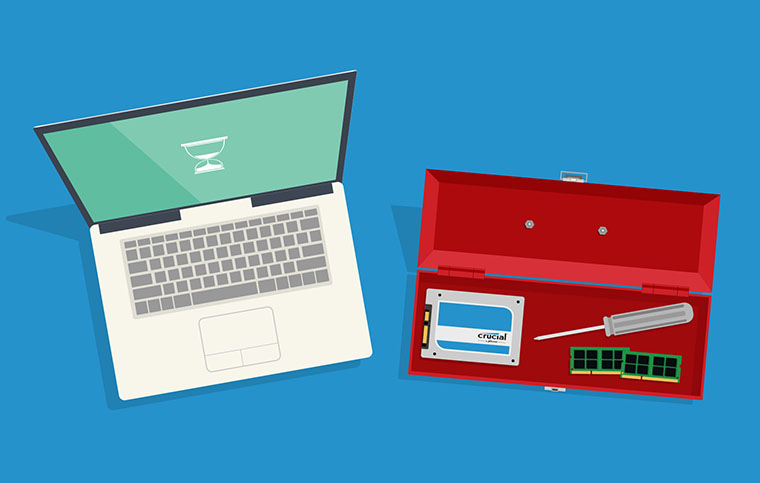 Crucial, a prominent brand of Solid State Drives and computer memory says that it has the solution to slow computers. Many of them anyway.

As Mathew Luu from Micron Technology, which owns the Crucial brand, explains: “You just want a computer that works as it should. Fixing a slow computer can seem like a daunting proposition, but it’s not; if the problem isn’t a virus or malware, just add more memory and an SSD. These adjustments, which don’t require advanced computer skills, can be done in minutes and instantly deliver lasting results.”

An SSD – Solid State Drive – offers significantly higher speeds and uses less power than the traditional hard drive. Because of the exceptionally high access speed, things like file fragmentation no longer slow down access. Fragmentation is where bits of a file are scattered in physically different places on a hard drive, forcing the ‘read’ heads to dart to and fro when trying to read them.

Crucial’s tests from August 2015 indicate that SSDs are six times the speed of hard drives on average.

SSDs are for storage of apps and files. Computer memory – the RAM – is for the short term holding of data that is presently being processed and the computer programs doing the processing. If you don’t have enough to run all the programs you want to run at the same time (and remember, the operating system is using up a fair bit of capacity all by itself), then your computer is going to have to waste time copying the contents of the RAM out to storage and back again. That might not seem like a big deal, but it really does slow things down.

For light use – word processing and web browsing – 4GB is fine. Bringing it up to 8GB will provide a performance boost if you’re doing more work than that. But if you’re doing video editing and other intensive projects, then you’ll be wanting at least 16GB. But, then, you will likely already know that.

Mr Luu might be overstating the ease with which these upgrades can be performed. You should at least find out what motherboard your computer is using and the details of the RAM already populating it so that you buy compatible additional RAM. That’s for Windows computers. Macs have a more controlled environment, so just the model and amount of RAM already in it is enough to determine what else you can add (if any). If you aren’t completely comfortable with this, consult a friend who knows how to do it, or pay a computer technician.

As for upgrading to an SSD, that is indeed a daunting proposition. The physical installation is easy enough, but if you want to realise the speed advantages, it needs to be the drive upon which your operating system and programs are installed (the ‘c:’ drive for Windows computers).

So the hard part of adding an SSD is having to reinstall everything, including the operating system. I for one always find that daunting.