Dodo is a dodo for falsely promising ‘perfect for streaming’ 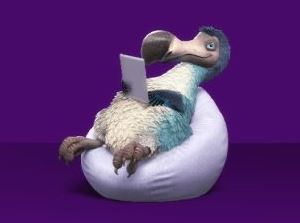 Dodo, an NBN internet retail service provider, has had its proverbial goose cooked by the ACCC for false and misleading advertising. It will refund $360,000 to 16,000 current and former Dodo customers.

Dodo is part of the Vocus group that also trades as Vocus Communications, Commander, Engin, Nextgen and iPrimus in Australia and Slingshot, Flip, Switch and Orcon in New Zealand. All share Vocus back end, licences, infrastructure, services, billing and management.

It is not the first time this group has had NBN issues.

The ACCC pinged it in March 2018 required it to pay refunds over National Broadband Network speed concerns to more than 5000 of  subsidiary brands’ customers. Dodo was caught telling porkies in March 2018.

The make-up was 3384 Dodo, 1912 iPrimus and 565 Commander. The majority were on fibre-to-the-node (FTTN) connections and had paid for a 100Mbps speed plan, with some on fibre-to-the-building. Dodo no longer offers 100Mbps NBN plans.

In fact, in February this year, Vocus announced that it (and its brands) no longer intends to grow its NBN customer base and will focus on optimising its experience for existing broadband customers. In particular, the company said there was “no profit margin after the costs to migrate, acquire and service, together with backhaul and other admin and operational costs.”

Perhaps it is because in July this year Vocus said it was looking to flog the embattled retail brands  Dodo and iPrimus off. Vocus has about an 8% NBN market share. Dodo’s ads are here.

Chief executive Kevin Russell told the Sydney Morning Herald “It’s [NBN] a low point in terms of business performance. At some point – a number of years down the line – I accept it’s not a core business”.

Dodo is seen as a low-cost provider with higher contention ratios, lower reliability and poor support.

Product Reviews give it a 1.5-star rating (from 2803 users – 2254 gave it 1 star),  and users say that it’s highly predatory and aggressive trying to tie you up as with a gas/electricity/NBN and mobile bundles. “Once they have your details, they will harass you with sales calls trying to get you to sign up with every other service they provide. Only a fool would sign up with them.”

A key part of its retail strategy was to offer some 32 internet data plans in Australia. 16 are legacy ADSL2+, 12 relate to fixed and wireless NBN, and four are mobile broadband.

Dodo dropped its 100Mbps NBN plans after the last ACCC fine. It now offers standard (20Mbps) and Standard Plus (40Mbps) which use the NBN Tiers 25/15 and 50/30Mbps. Looking at its website, it appears to have dropped the 12/7 Tier that got it in hot water again with the ACCC.

From November 2015 to March 2018, Dodo advertised its NBN broadband plans as ‘perfect for streaming’, including for plans with maximum speeds of 12 megabits (Mbps). Some of these plans only had 10 gigabytes (GB) of included data.

“We were concerned that Dodo customers on these plans could not reliably stream high-quality video, particularly when others in the household were using the internet at the same time. At 12Mbps, Dodo’s customers could not stream ultra HD video at all,” .

The ACCC also considered that Dodo customers would use up their data allowance after a modest amount of streaming when their included monthly data is just 10GB (read the release here).

“According to Netflix, high definition streaming uses up to 3GB of data per hour. With these plans, a customer would have to pay extra if they streamed just two or three movies.”

“Consumers rely on how internet providers describe their services when choosing the best broadband plan for their needs, so these descriptions must be accurate.”

“It is simply unacceptable for an internet service provider to tell consumers that their services are ‘perfect’ for a particular use, and to then charge them extra when they use the service as advertised,” Mr Sims said.