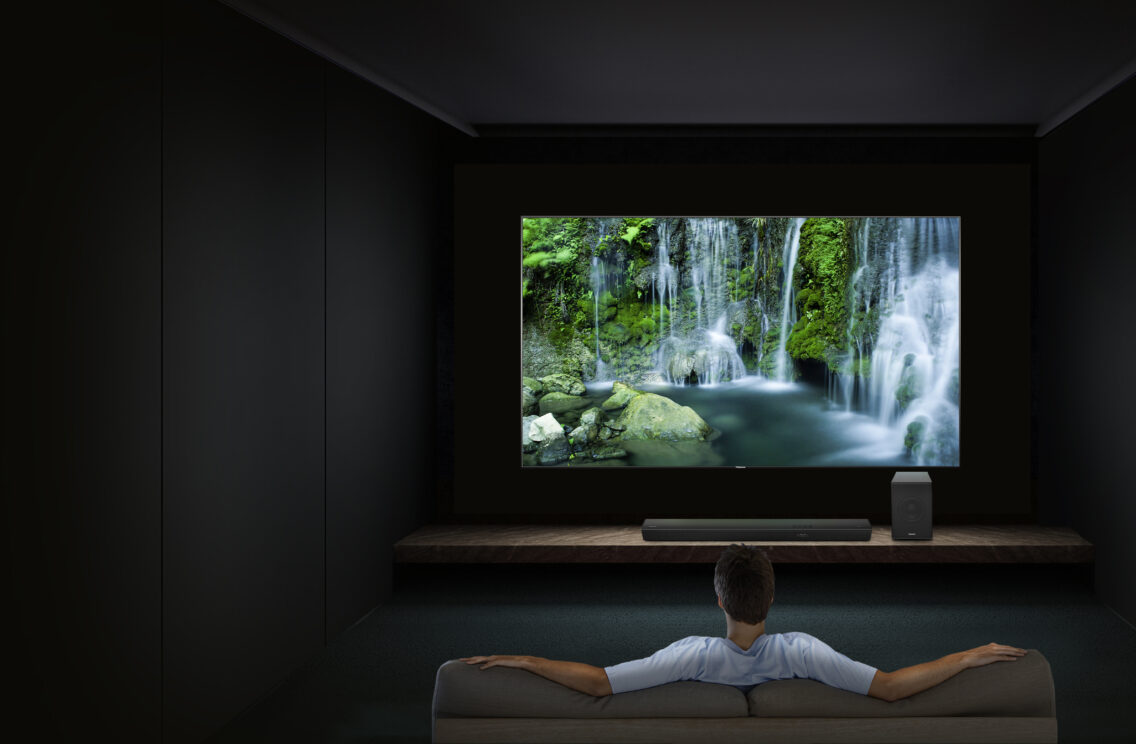 Brimming with speakers and packed with features, the Hisense U5120G Dolby Atmos 5.1.2 Sound Bar aims to give your lounge room an audio overhaul.

While it’s great to enjoy movies at home which sound as good as they look, not everyone has the budget or the space for a complete home theatre surround sound system with a room full of speakers. That’s where a soundbar can come to your rescue, significantly beefing up the sound from your television without taking over the room.

The latest generation of soundbars do their best to replicate full surround sound, thanks to support for the latest high-end audio formats and the inclusion of extra built-in speakers. This includes up-firing and side-firing speakers, to create a more immersive soundstage and create a sense of height.

The Hisense U5120G Dolby Atmos 5.1.2 Sound Bar combines all of this to help bring movie night to life.

At 1200 mm wide, the Hisense U5120G Dolby Atmos 5.1.2 Sound Bar is designed to sit on the benchtop in front of your television, or mount on the wall below it. It requires power and a connection back to your television, but the wireless subwoofer helps reduce the number of cables running around your lounge room.

Hisense hasn’t skimped when it comes to connectivity. You’ll find two HDMI inputs for connected devices like disc players and streaming boxes, along with an HDMI output which carries the picture through to your television. It can pass-through 4K HDR video, along with CEC and IR commands.

There’s also support for eARC, so if you’re watching video using a Smart TV app like Netflix, the television can pass the audio back along the HDMI cable to the soundbar. Support for high-end surround sound formats includes Dolby Atmos, Dolby THD, DTS-X and DTS-HD Master.

Apart from HDMI, the soundbar features optical and coax digital inputs. You’ll also find Bluetooth and USB for streaming from external devices, but there are no built-in streaming services or support for smart assistants like Google Assistant or Amazon’s Alexa.

The soundbar comes with wall mounting brackets, plus there is support for optional extra rear speakers to further fill out the sound (which weren’t supplied with the review unit).

As a “5.1.2” soundbar, the U5120G aims to replicate the sound of a traditional home theatre system, with left/right/centre front speakers and left/right rear speakers. The subwoofer accounts for the .1, while the .2 refers to two up-firing speakers to take advantage of the height element incorporated into some formats like Dolby Atmos.

The 5 and the .2 and all squeezes in the soundbar, relying on a combination of 11 tweeters and woofers pointing in different directions. Naturally, it doesn’t sound as good as having seven separate speakers spread around the room.

The width of the soundbar offers a good separation between three front speakers to create a wide soundstage, Yet even with the extra speakers bouncing sound off the walls and ceiling, you don’t get the same effect as having physical speakers above and behind you. That’s the compromise that soundbars make.

While the Hisense U5120G Dolby Atmos 5.1.2 Sound Bar offers a range of sound modes, it also optimises the sound thanks to Eilex PRISM. This equalises acoustic power volume density frequency (APVD) response and corrects time and phase alignment errors of a speaker system, in an effort to provide true-to-original sound with the highest musicality and clarity.

You can also adjust the audio delay to ensure it is in sync with the picture.

It’s worth noting that the remote control is a bit of a design fail. The glare from its glossy coating makes it very difficult to read the tint, faint writing under the buttons.

Put to the test, initially the bass was extremely low when listening to the music in movie soundtracks, such as the moving car fight scene in Deadpool and the foyer fight scene in The Matrix. Thankfully, a firmware update provided by Hisense addressed this.

Now, the subwoofer packs a punch. As a result, the soundbar really brings Dolby Atmos soundtracks to life, offering a rich sound with plenty of depth and detail in the action scenes. When the pace slows down, dialogue is sharp and clear.

When it comes to Atmos’ sense of height, I turned to the B-24 bombing raid in Unbroken. Those upwards-firing speakers do the job, although the sense of height isn’t as distinct as other 5.1.2 soundbars I’ve tested – like the admittedly more expensive LG SJ9, LG SL10YG, Samsung HW-Q90R and Sonos Arc which were all north of $1000 in their day.

It’s worth noting they’re all heavyweight 500W+ systems like the Hisense, but the others still manage to deliver more than the 30W per speaker coming from this Hisense soundbar.

Standard Dolby Digital 5.1 soundtracks don’t fare quite as well, sounding a tad flat. Naturally they don’t sound as good as Atmos, but I’ve heard other soundbars do a better job of enhancing Dolby Digital to bring it to life.

The Hisense U5120G Dolby Atmos 5.1.2 Sound Bar ticks a lot of boxes in terms of features for a sub-$1000 soundbar. In return, it delivers decent sound for a mid-range 5.1.2 system and would make a solid addition to your average lounge room. That said, if you have an ear for detail, you might look to spend a bit more for a high-end soundbar which can better-deliver on Atmos’ immersive sense of height.

No, not if my budget would stretch a bit further.