A LASER Clock Radio to charge your Samsung Galaxy S8 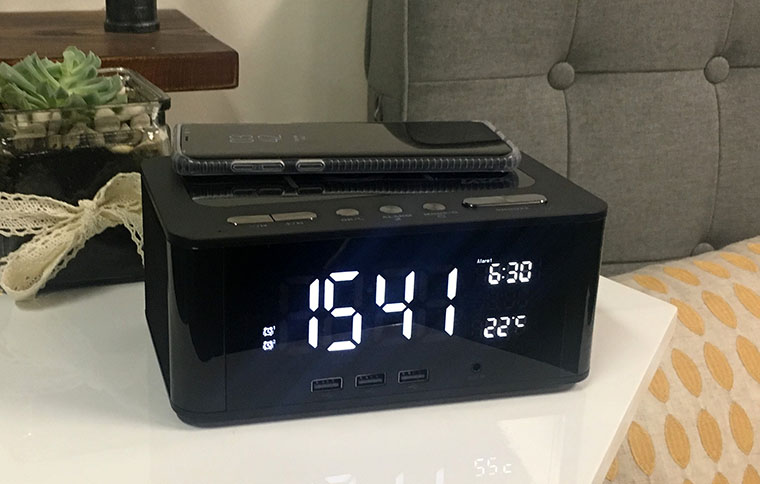 I do like the inventiveness that we see time and time again in consumer tech. And here’s another example, a LASER digital alarm clock with a built in charging pad for, you guessed it, the Samsung Galaxy S8 or S8+ phones.

It’s a smart idea, you realise, once someone has thought of it and produced the product. Most of us have a bedside clock radio. And most of us charge up our phones overnight. The latter process normally means that the rest of the day the Micro-B USB/USB Type-C/Lightning cable is flopping around. The plug on the end of mine has found a home, unsightly but handy, in a crevice of my bedside lamp.

But with this device, you go to bed and just put your phone on top of the clock radio. Wake up in the morning, and the integrated Qi wireless charging pad would have done the charging job for you.

(So, is wireless charging really easier than plugging in? I guess there’s only a second or two difference between the work involved in managing the two, but I for one love it. Even with the easier-to-handle USB Type-C connection on the Samsung Galaxy S8/S8+ phones, plonking the phone on a pad just seems so much more … civilised!)

In addition to the Qi wireless charging pad on the top, the LASER device has three USB ports on the back for the charging of regular phones, iPods or whatever. I should add that in addition to the Samsung Galaxy S8/8+, the S7 and S6 series also support Qi charging, along with the Samsung Galaxy Note 5 and the Moto Z phones. But of course not all phones can be wirelessly charged, including those from Apple.

And it supports Bluetooth (with NFC for easy connection), with both playback of music from the phone using the radio’s speaker, and hands free calling while the phone’s charging.

The clock radio’s more traditional functions are mostly covered. It has a large LCD display with auto dim for when the lights go out, two alarms, a snooze button and two alarm settings. It appears that it only has an FM radio, though, not AM or DAB+, so depending on where you are, it might not deliver the stations you’d prefer.

You can but the LASER wireless charging clock radio for $98 at Harvey Norman.