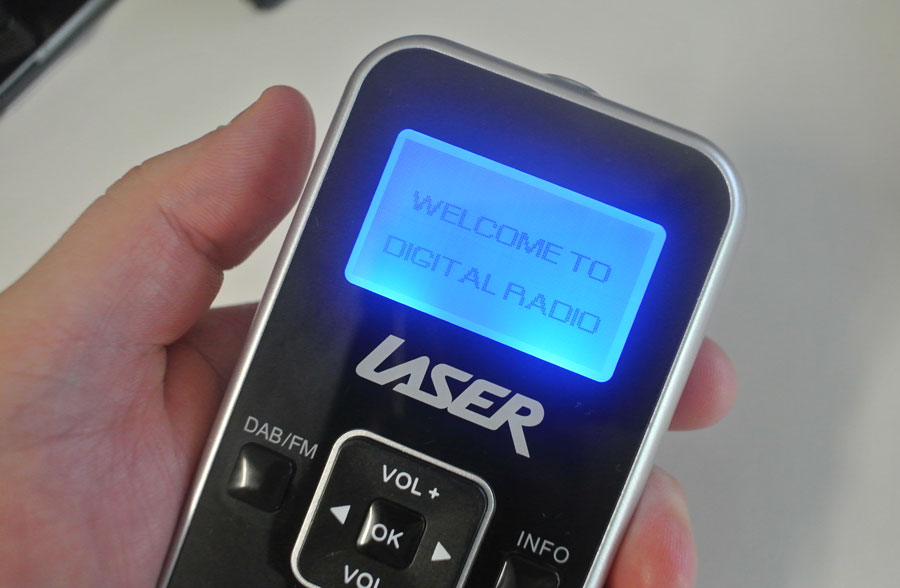 Laser’s Pocket Radio allows you to enjoy digital radio when you’re out and about, and at $90 it’s one of the cheaper digital radio options available. Even then, it’s probably $90 too much.

Australia’s DAB+ digital radio system provides extra radio channels with unique programming, plus all the AM station in better audio quality.  A relatively new technology, equipment can still be pricey, so at $90, the Laser Pocket Radio caught our eye.

The easily pocketable silver and black plastic “Pocket” features a small 1.7 inch LCD screen, with three buttons and a directional pad below. On the left side, you’ll find a power button as well as a lock switch, in case you don’t want to accidentally change volume or station while you’re on the move.

A 3.5mm headphone jack sits on the top of the unit. The battery compartment housing three AAA batteries at the rear of the radio, and the unit is packaged with a manual and a pair of earbuds.

The Laser Pocket Radio a little bit smaller than an iPod but twice as thick. It’s also fairly easy to use: turn it on and “Welcome to digital radio” text across a appears on the monochromatic LCD screen. A blue backlight is activge whnever it switches or, or any button is pressed.

You can switch between digital radio and FM by hitting the “DAB/FM” button, navigate the menus by holding down the “Info” button, or just start listening to the radio by playing with the directional pad.

There isn’t a lot of functionality here to speak of, but what does work is poorly designed. Pressing up and down on the directional pad changes volume while pressing left and right controls the menus. The problem with this design scheme is that the menu appears in a vertical list, so every time you want to change a station, you’re pressing the left and right buttons while scrolling up and down a list.

It’s very counter-intuitive, and one has to wonder why Laser didn’t just make the volume buttons the left and right directional arrows.

This, however, is the least of the problems we encountered with the Laser.

For starters, it crashes a lot. All the time, in fact.  And when it does, the radio continues to play, but the controls are frozen. Press all the buttons you like, as many times as you like and nothing happens.

You can’t even turn it off using the power switch. You need open the battery compartment and remove a battery to restart it.

Most times, our Laser review sample crashed while we were making selections from the radio station selection menu.

Signal is another weak point.  Sometimes it works, sometimes it doesn’t. The patchy reception wasn’t location dependent either; we experienced both strong and weak reception while stationary in the one spot. While listening to one station, we received no signal until we took the batteries out and put them back in again.

When you do manage to receive a signal – and it happens sometimes, momentarily – the quality is good, reminding us of why DAB+ is worth having.

And then the radio will crash again. Sometimes, it will even switch itself off, the screen blinking to “Bye bye” as it does.

The FM mode is, strangely, the most functional, although unlike the DAB+ section, you can’t automatically scan for stations, which is a little stupid. No one likes holding down left and right scan buttons and fine-tuning FM stations on their car radios, so why auto scan isn’t catered for in a portable is baffling.

Don’t judge digital radio based on our comments of the Laser Pocket. It’s a good technology that, implemented well in hardware, is extremely enjoyable. The Laser Pocket, however, is easily the poorest implementation of DAB+ we’ve encountered, and one of the least impressive products to cross our desks in 2011.