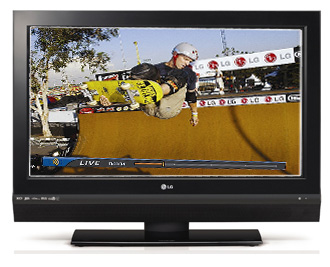 Well, you have to hand it to LG when it comes to innovation. For years there have been Personal Video Recorders -telstra sex romp digital TV receivers with a built-in hard disk upon which you can record TV broadcasts for later playback. But LG is the first to incorporate one into a TV. More correctly, it is the first to incorporate it into a high definition TV, because Humax beat it to the PVR punch with its 40 inch LCD way back in 2006. This set is standard definition only, however, and offers a 40GB hard drive.

LG’s TV itself is a 42 inch (107 cm) LCD model with a resolution of 1366 x 768 pixels. That means it potentially gains some sharpness and detail advantage from high definition broadcasts, without quite matching the capability of a full 1080p display.

What sets this TV apart from all others (except LG’s 50 inch plasma version) is the PVR function. I wasn’t expecting a whole lot from this, given it is the first of its type, but I was genuinely surprised.

You can of course record digital TV, including high definition (up to 30 hours of this, or 60 of SD). But you can also record the analog TV tuner, or one of the external analog inputs. That means LG has included a video analog to video converter within the unit. To be fair, the picture quality isn’t very high with analog sources, but it is still an excellent feature.

It also has a time shift feature. When it’s on, it records up to the last two hours of your viewing. At any point you can rewind and watch a section again, or just pause a program.

LG digital TVs are better than every other model on the market in at least one respect: full integration of the digital TV tuner. There is no need to separately tune in the digital and analog TV tuners. Just start up the autoscan and all stations are identified and stored. Then you can edit the stations, hiding the duplicates you don’t need.

This TV has two definite levels of performance. The whole PVR thing is brilliantly implemented, offering superb performance. And if you’re recording digital TV, the picture quality on playback is identical to the original broadcast.

But things are not so good with the unit’s performance just as a plain old TV. There are some minor issues, such as the relatively low contrast ratio in comparison to the competition, leading to somewhat washed-out blacks, and a viewing angle restriction that reduces contrast sharply beyond about 45 degrees.

But the main problem was the picture processing circuitry. With any degree of complexity in the image, it simply seemed unable to keep up, producing a distinct blocking noise both on digital TV and external video sources connected via HDMI and S-Video. It also did a poor job with interlaced signals coming into one of the external inputs, reducing picture sharpness and introducing processing artefacts, even with the ‘Cinema Mode’ set to ‘On’.

Nor does the TV support 1080 resolution progressive scan video.

I would love to see LG incorporate this level of PVR functionality into a TV capable of matching it in sheer picture quality. Until then, I have to say that for dedicated high definition fans, this is not the TV for you.