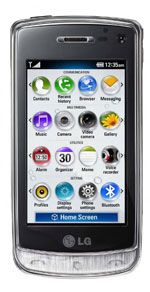 LG has come out with some pretty feature-packed mobiles lately, but none have quite had the glitz and pizzazz of the GD900. Not only does it have a full touchscreen, but it also packs a completely transparent numeric keypad with luminescent numbers, a feature not seen on any other mobile phone. On the surface, the LG GD900 has the looks of a supermodel – but is it burdened with a supermodel’s brains?

The LG GD900’s design is its most obvious and eye-catching feature. While the phone can be used entirely by finger-taps on the full touch screen, the screen also slides up to reveal a glowing see-through numeric keypad. The keypad is hard plastic yet hollow, and the numbers manage to glow and respond to the touch just like any normal keypad.

As sexy as the see-through keypad is, actually using the device is not a simple task. Typing text messages or dialling numbers can be done through either the keypad or the touch screen, but nether input works very well. The small screen has limited space, making touch screen typing difficult while typing on the numeric keypad still requires you to use the touch screen for some inputs, meaning you thumbs are forced to jump back and forth between keypad and screen.

The GD900 uses LG’s ‘S-Class’ user interface, which basically offer four different home screens for different tasks. There’s a homescreen for your preferred shortcuts (to Facebook, YouTube, email etc ), a widgets screen which you can load with weather updates, calendar, notepad etc, a contacts screen where you can ‘scroll’ through favourite contacts with a flick across the screen, and a media homescreen to load up with your music and movies. A sideways flick across the screen rotates through the four homescreens as if they were on a cube, while a separate button below the screen itself zooms out so you can ‘spin’ the menu cube – an entirely useless feature.

The S-Class interface is terrible, to be blunt. Homescreens load slowly, finger taps on the screen produce lagged responses, and rotating through music or movies (which are presented as a 3D wheel) is an equally ungratifying experience. It is just difficult to use – not only do you have four homescreens to navigate, but you also have another menu screen to access settings, utilities, and multimedia – meaning there are so many different ways to play a track or find a contact it becomes very confusing.

The GD900’s standout feature is its 8 megapixel camera, which performs with great aplomb. 8 megapixel puts this device up there with the top of the range camera phones from rivals like Sony Ericsson, Samsung and other LG devices. Camera menus are simple to navigate with a few finger taps, and tests showed pictures to be bright and clear – the LED flash is a neat addition too. Slipping between photo and video recording is also a breeze, and while the GD900 won’t be replacing your video camera anytime soon it does offer a simple to use and functional video experience.

The media player is… different. It’s not necessarily bad, but it’s certainly not as intuitive as an iPod or walkman. It’s great that it can play DivX videos and all the usual music files, however the interface for playing files feels unpolished. You will likely be annoyed by the lack of a 3.5 mm headphone jack (you’ll need to plug your phones into a clip-on attachment.)

The GD900’s web browser is abysmal. While it allows for the use of touchscreen gestures like pinch to zoom and fingertip scrolling, the response time to finger taps is so slow you’ll find yourself accidentally scrolling all over the screen because the device has only just registered a touch you made several seconds earlier. Clicking on the correct link is difficult due to the unresponsive on-screen pointer.

For an RRP of $899, the LG should be compared to the Apple iPhone 3GS, HTC Magic, Samsung UltraTouch and several solid Nokia devices. Each of these rivals offers a better user experience, the only stand out feature of the GD900 is the great 8 megapixel camera – and the translucent keypad.

Slick looks, bad experience. LG has come up with a really innovative design and the transparent numeric pad will surely turn a few heads – but the GD900 is not a good mobile phone. The 8 megapixel camera is the phone’s best feature, but there really isn’t much else in there to set the LG apart – its other features are standard on almost every device. The user interface is counterintuitive, unpolished and tricky to use. Many will be drawn to the GD900’s futuristic keypad as a reason to buy – but definitely spend some time trying to use it before handing over your cash.