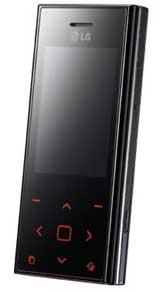 When it comes to the ‘fashion phone’, LG has typically been first in and best dressed with handsets like the Prada and other ‘Chocolate’ branded phones. The Chocolate Slide has been unveiled around the same time as the new touchscreen Chocolate BL40 – both devices have stunning good looks, and the BL40 has brains to match, but can the ‘little brother’ Slide compare to its high-spec sibling?

This is an important point to make very early on: The Chocolate Slide is definitely a fashion phone and definitely not a feature phone. But that’s not necessarily a bad thing – many feature-laden smartphones out there are a nightmare to use, so the Chocolate Slide actually wins points for simplicity. It’s minimalist in every sense, from the sleek piano-black exterior to the tried-and-true menu screen which you’ll be able to navigate with ease.

Main navigation keys are found on a touch-sensitive luminescent pad below the screen, and the numeric pad offers a satisfying click when you’re texting. One button below the navigation keys offers access to a widgets menu – weather, calendar, memos, alarms, even RSS feeds. A second key gives you a mini-menu with quick access to open folders or applications.

The Chocolate Slide does have one feature which stands out: a 5.0 megapixel camera. Yes, there are numerous rival handsets (and other LG’s) with 8.0MP or better cameras, but 5.0MP is still very good quality and the included autofocus and LED flash mean the Slide is a cameraphone contender. One let down – very dated video capture, at only 15 frames per second QVGA, you probably won’t bother.

When you compare the Chocolate Slide to other feature-light handsets, you’ll find it offers many of the same basic features in a much nicer package. There’s an abundance of similar handsets from Sony Ericsson in the same price range which lack the Chocolate’s eye-catching design, likewise a number of Nokia and Samsung handsets with basic features missing the great looks and 5 megapixel camera. The Chocolate is trumped by feature-rich smartphones – but really it’s not even trying to compete in that part of the market.

The LG New Chocolate is a simple handset done well. If you’re the kind of person who doesn’t want email or web browsing or document viewers or any of that fancy stuff, the Chocolate Slide performs with elegance and style. More beauty than brains, but since when was that a bad thing anyway?