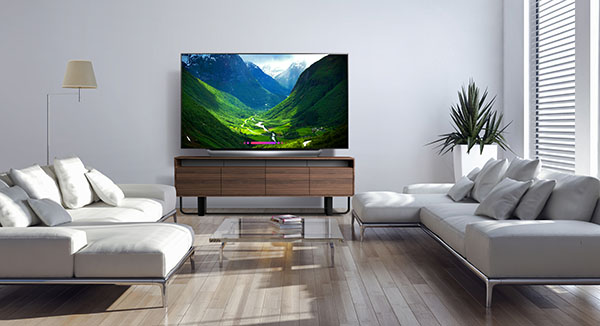 Let’s be clear, OLED is the best TV tech available today. And LG is the source of OLED. The LG OLED65C8 is the first of LG’s 2018 TV range that we’ve gotten our hands on.

This thing is gorgeous, in part at least for that very thinness. The bottom section is thicker. The electronics and connections do have to go somewhere, after all.

The LG OLED65C8 TV is the middle model of LG’s entry-level OLED range. As with all current LG OLED models, it features UltraHD (3840 by 2160 pixel) resolution. The panel is the same as that of the two higher ranges, as is the picture processing. Go higher if you want even more style or perhaps better sound.

There are the usual HDMI inputs and USB connections. The TV has a single HD tuner. You can plug a hard disk drive into one of the USB sockets and record Live TV or time shift it. Also included is Freeview Plus, so you can use catchup TV services and the improved EPG available from most capital city TV stations, and ABC and SBS throughout Australia. See here for details of Freeview Plus.

The LG OLED65C8 is, of course, a smart TV. For years I’ve been much taken with LG’s smart interface. LG must hold some important patents because surely others would have adopted something like its Magic Remote. This controls a pointer on the screen. You move the remote, the pointer movies. You put the pointer on a button or selection and click. It’s just like a mouse.

The last version of this system was called webOS 3.5. Apparently, numbers are no longer an important thing, for the new version is called webOS Smart TV. It has changed little from the old one. It still offers a ribbon of apps and controls across the bottom of the screen when you press the Home button. You can re-order these to reflect your usage. Have your most commonly used things at the left end, and they’re on the screen when you need them without having to scroll.

Unlike Android TVs, it does not support Google Chromecast, but it does support Miracast. Most Android phones can use that to mirror their screens, photos and videos to the TV. (Exception: Google Pixel phones won’t.)

It also has Netflix built in (complete with a button on the remote). Other streaming services include Google Play, Youtube, Bigpond Movies, Stan and Eros Now.

Huh? Eros Now? It turns out that is not what the name implies to a Westerner. In fact, it’s a long-standing streaming service for Bollywood and other entertainment from the Indian sub-continent.

You can also send it music, play back a wide range of media from the network or USB sources. One new feature is “High Frame Rate” video playback. LG defines HFR as video that runs at 120 frames per second, compared to the 24fps of almost all film, 25 or 50fps of most Australian TV and 30 or 60fps of most American TV. In film, HFR refers to a range of speeds, although typically they are 48 or 60fps rather than the usual 24fps. HFR produces noticeably smoother motion on the screen. But at this point this 120fps feature is of limited value because it only works with USB media.

More importantly, the picture supports the high-quality standards of HDR, Dolby Vision and Hybrid Log Gamma. It does not support a new competing standard called HDR+. Our understanding is that the only material with HDR+ encoding is via Amazon Prime. I would certainly hope that HDR+ falls back to standard HDR if played on this TV. That’s what Dolby Vision does if played on a TV or device that doesn’t support it.

Talk to your LG OLED65C8

I’m usually unimpressed by such things as voice control and motion control (remember that from a few years ago) in TVs. For the most part, I can’t say I’m thrilled with this TV’s voice control, but I did find aspects of it useful. To use the voice control, you press and hold down the microphone button on the remote control. The TV presently uses Dragon Naturally Speaking software to interpret what you’re saying, and LG’s ThinQ servers back in Korea work out what you mean. Later this year LG is moving over to Google for the word reading part.

The unimpressive part is in things like telling the TV to mute itself. Yes, it works. You press and hold the microphone button and say the word “mute”. The TV thinks about this for two or three seconds and then mutes the sound. But, of course, why? The actual “mute” key is 4mm away from the microphone key. And it acts instantly. There are a number of commands like that. If you have the remote in your hand, it’s easier to just tap the relevant key.

But there are other things where it’s more efficient. For example, press and say “Picture Settings”. That takes you to the TV’s picture settings menu quicker than you can navigate there the old way. “About this TV” is faster still if you want to check for TV software updates. But say “Software updates” and you’ll be presented with a list of YouTube clips relevant to software updates.

There’s a long list of key phrases and sensible synonyms. “Programme 20” is the right thing to say to switch to ABC HD, but “Channel 20” also works. “ABC HD” doesn’t.

Picture quality from this TV is its other exceptionally strong suit. As I mentioned, OLED excels with black. That means two main things. First, you can watch shows even in a dim room without losing any of the intensity of the blacks. And that, in turn, makes the bright parts of the picture subjectively brighter still.

Second, deep blacks provide an excellent underpinning for colour, which is rich, powerful and unmarred by any breakthrough of backlighting.

The LG OLED65C8 uses a 10-bit panel. That means that the TV represents each of the three primary colours at more than a thousand levels. And that means more than a billion colour combinations. DVDs and regular Blu-ray discs get by with 8 bits (for 16.7 million colours). The TV did a good job of translating that those to smooth colour graduations, and of upscaling their lower resolution to UHD. UltraHD Blu-ray makes full use of the 10-bit capabilities. “Westworld” looked especially luscious, thanks to the Dolby Vision encoding and the brilliant handling of dark scenes by this TV.

The delivery of free to air TV was solid, too. Now that the “main” TV stations are now duplicated in HD; we can enjoy many sporting events with solid picture quality. Screens of 65 inches don’t tend to go too well with the noise inherent ns SD TV video. With HD, they look good. This one looks excellent.

I usually use a home theatre receiver to create fine surround sound for my home entertainment needs. However, this TV sounded quite respectable. It has 40 watts on tap for four speakers: two woofers and two “High-Mid-range” speakers. The trick with this TV, though, is that the stand is shaped in such a way that it takes that sound from the smaller speakers and bends it through ninety degrees, reflecting it out into the room.

The TV implements something called “Dolby Atmos”. I quote that because originally Dolby Atmos referred to the Dolby audio process by which sound was handled as steered objects, and could be reconstructed in the listening room by using surround and ceiling speakers. Switching Dolby Atmos on in this TV made a subtle change to the sound, neither improving nor harming it.

If you want to use external audio gear, you can feed the signal via the Audio Return Channel on HDMI. Or by optical digital audio. Or by the 3.5mm headphone output.