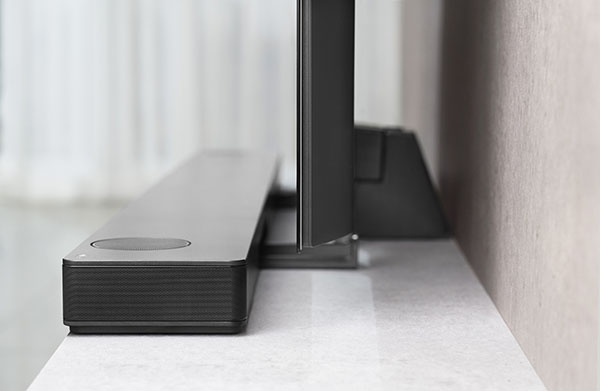 LG has refreshed its soundbar series for 2018 with five new models. The three lower models offer 2.1 channels. That is, the bar is stereo and there’s a separate subwoofer. But the LG SK10Y is the top of the line model. It has 5.1.2 channels. And they’re not just fake channels. And, blow me down, it sounds like an audio product ought to.

The LG SK10Y also consists of two parts (well, three including the remote control). The bar is quite substantial, weighing 7.5 kilograms and measuring 1443mm wide, 146mm deep and 63mm wide. Its width is a good match for a 65 inch TV. I paired it with a 2018 LG OLED65C8 TV (reviewed here).

Packed inside it are seven 50-watt amplifiers driving ten speakers.

The front left, centre and front right channel speakers each consist of an oval woofer and a round tweeter. On the ends are two of the oval woofers doing full range duty and acting as surround speakers. On the top at either end are two round full range speakers for Dolby Atmos work.

Dolby Atmos can refer to many things, it seems. For movie makers, it’s a system for mixing and carrying surround sound using audio “objects”. Those are decoded by a Dolby Atmos playback system using many different combinations of speakers. But it also means “height”. Instead of the surround sound being just to your front, sides and rear, Dolby Atmos includes sound over your head.

Those two speakers on the top are what’s called “Dolby Enabled” speakers. They sound shoots upwards. The sound is processed in a way that is intended to make the overhead effect convincing.

At the back, the LG SK10Y soundbar has two HDMI inputs and one HDMI output. It supports the Audio Return Channel. Your TV can send its audio back down that HDMI cable so that the soundbar produces the sound.

Glowing through the grille is a display with relevant information about what input and sound mode are in use.

Wireless peripherals for the LG SK10Y

As part of the LG SK10Y package, there’s an equally hefty subwoofer. It weighs 7.6 kilograms and stands 390mm tall, 221mm wide and 313mm deep. The design is bass reflex, with a flared port on the back and a driver of uncertain size on the front. Inside is a 200 watt Class D amplifier.

The subwoofer and soundbar are pre-paired.

Then there’s the infrared remote control and LG Wi-Fi Speaker app for iOS and Android. You will need that app to initially set up the speaker if you’re planning on a Wi-Fi connection. In addition, that app can send music from your phone to the speaker via the network

Or you can connect a device using Bluetooth.

Also in the box: an optical digital audio cable (useful for older TVs without HDMI ARC support), and wall mounting brackets for the soundbar.

The LG SK10Y is also a network media player. That is, you can send that’s on your network, or on your phone to it. There are two ways: via Chromecast or DLNA. Both worked equally well for me. It supports high-resolution audio in addition to the usual CD and lesser standard (eg. MP3, AAC).

It really does support high-resolution audio. I sent quite a few 192kHz, 24-bit jazz tracks to the soundbar successfully.

There is both an Ethernet port and Wi-Fi. The Wi-Fi supports the 802.11a/b/g/n standards, from which I can deduce that it is a dual band system. I used Wi-Fi, and that was more than sufficient for the high-resolution music I mentioned.

Also supported, Spotify Connect, and basically any music or audio app that works with Chromecast devices.

Setting up was pretty easy using the app. It searched for the LG SK10Y soundbar, found it, then asked me to enter the Wi-Fi password. Moments later it was done.

The soundbar doesn’t do anything to the video signals that might be passing through it on their way from Blu-ray player to the TV. There are no on-screen menus or other overlays. But there’s always the question: will the latest video formats pass through successfully?

What I haven’t mentioned so far is that UK high-end audio maker Meridian has leant its name to this model. It turns out that sound is “tuned” by Meridian. So, is LG responsible for how it sounds? Or is Meridian?

Sometimes I wonder if the use of a name in this manner is simply a revenue-raising exercise for the prestige-name company. But that’s clearly not the case here.

The fact is, at first listen to stereo music, the LG SK10Y soundbar sounded like a respectable pair of high fidelity loudspeakers. The tonal balance was spot on. The detail and stereo spread was quite good. This is the best sounding LG system I’ve ever heard. Indeed, I think it may be the best sounding system I’ve heard from one of the Japanese or Korean consumer electronics giants. Certainly, the best sounding soundbar.

Meridian knows how things should sound and has made it so with this system.

But it’s not just stereo. I pulled out a Dolby Atmos demonstration Blu-ray disc and played it. The soundbar recognised that it was Dolby Atmos and processed it appropriately. Much to my surprise, there was a very thorough envelopment of me by the sound field. It was to both sides and above me and even a little behind.

The subwoofer had been solid and tuneful with music. It was a little overwhelmed by these sound tracks. Dolby has really loaded in the bass. So I moved to an Atmos music soundtrack on the same disc, and that was far more impressive, with clean and punchy music and a solid bass beat.

How about regular non-Atmos surround? I put on a Dolby Digital movie – specifically the 1990s Gus Van Sant remake of Hitchcock’s Psycho. As Marion Crane arrives at Bates Motel, the rain is hammering down on the roof of her car. Initially, this was unimpressive, but the soundbar didn’t seem to have switched to surround mode. I hit the “Sound Effect” button on the remote control, and it went to “Movie”. The sound field opened up and surrounded me and … the rain was pummelling a virtual metal car room above my head.

The only weakness in the soundbar was that with music fed over HDMI and the sound mode on “music”, the volume levels were sometimes a little low, even with the volume turned up to the maximum level. That was not the case with music fed via Wi-Fi, or Spotify music.

The LG SK10Y Dolby Atmos Soundbar is a fine sounding unit at a reasonable price. Thanks be to Meridian for some fine tuning.

LG’s product page for the LG SK10Y soundbar is here.