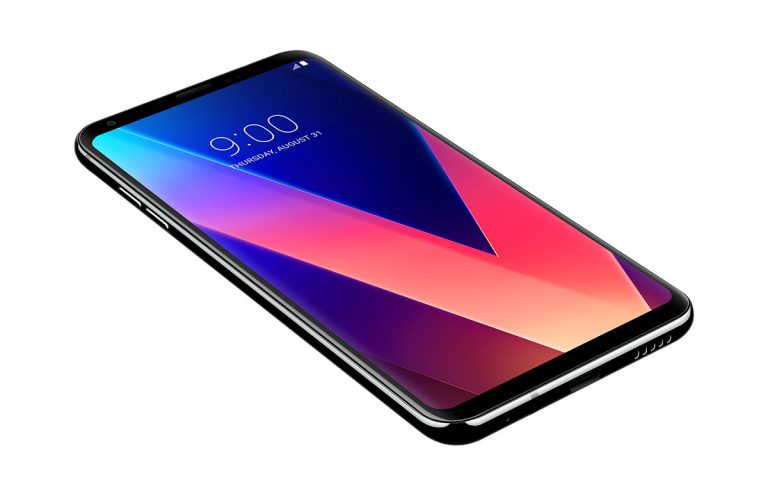 Usually vendors are coy about mentioning their competition, but LG is explicitly targeting potential Apple and Samsung purchasers with its new LG V30+ smart phone. Not just any old Apple, but the top of the heap Apple iPhone X. Not just any only Samsung, but the company’s new pride and joy, the Samsung Galaxy Note8.

It goes iPhone X rather than iPhone 8 because the X has an OLED display, as does the V30+. LG calls its one the “OLED FullVision display”. It’s six inches in size – bigger than that of the iPhone X, smaller than that of the Note8 – in the 18:9 or 2:1 aspect, and has a massive 2880 by 1440 pixel resolution.

Since OLED only lights up the pixels it needs, the LG V30+ also features an “always on” capability.

The phone is thinner than most at 7.4mm and has a screen to body ratio of 81.2%. The front is Corning Gorilla Glass 5 and the phone is IP68 rated, which means safe against dust, and safe in water over a metre deep. LG’s footnote says “Water resistant up to 1.5 meters for 30 minutes”.)

On the other hand, it’s fitted with 128GB of storage as standard (compared to 64GB for the others) and like the Note8, and unlike any iPhone ever, you can expand the storage with microSD (up to 2TB if you can find such a high capacity card). Or you can use that space instead for a second SIM.

It supports 4G/LTE mobile communications of course. No download category is stated, but he Snapdragon 835 supports up to Cat 16, 1000Mbps, downloads, and Cat 13, 150Mbps, uploads. Also fitted, dual band WiFi to 802.11ac, USB Type C with OTG, and Bluetooth 5.0. Pretty much anything you could want.

The 3300mAh battery can be speed charged thanks to support for Qualcomm Quick Charge 3.0 support. That intelligently uses between 3.6 volts and 20 volts, and up to 4.6 amps, to really pour power into a phone battery. It also has wireless charging capability.

The V30+ recognises fingerprints and faces and does all the stuff that you’d expect from a modern high end phone.

In addition to the screen, LG is particularly proud of the camera. It, says LG, “boasts the first F1.6 aperture camera lens and the first glass Crystal Clear Lens.” (LG’s italics.)

Still, the dual cameras on the LG V30+ seem impressive. Protected by Gorilla Glass 4, the glass lensed f/1.6 aperture one captures sixteen megapixels and uses a ten bit HDR image sensor. It has RAW capture capability and a manual mode for those who like to be a little more interventionist in their photography.

The other camera is an f/1.9 aperture, 13MP model with a wide, 120 degree, field of view (compared with the 71 degrees of the 16MP camera). It also supports RAW and manual modes. It’s unclear to what extent, if at all, the two cameras work together to create composite photos.

The front camera is a five megapixel f/2.2 unit.

With the V20 LG started really pushing audio quality, using higher end digital to analogue converters. That continues with this model, with the phone carrying a Bang and Olufsen logo. It uses 32 bit hifi quad DAC. (Quad DAC? No, not quadrophonic sound. By combining multiple DACs greater decoding precision can be achieved. That’s what they mean here.)

Apparently you can even do highly esoteric thinks like change the shape of low pass filter used by the DAC between Short, Sharp and Slow. Wearing another hat, I frequently play with expensive, sometimes very expensive, audiophile DACs and that’s a rare feature even for them.

And it even supports “MQA”. That stands for Master Quality Audio, a system developed by UK company Meridian for losslessly packing higher resolution audio into smaller, streamable files, and authenticating their integrity. There’s a fair bit of MQA encoded music on TIDAL.

LG is of course particularly keen to contrast its price against the competition. The LG30+ is priced at $1199, compared to $1499 or more for the competition it has chosen to take on. As mentioned, the phone will be available for purchase from 16 November 2017 from JB HiFi. Buy from JB before 24 December and you get a bonus set of Beoplay H3 earphones, normally priced at $229.