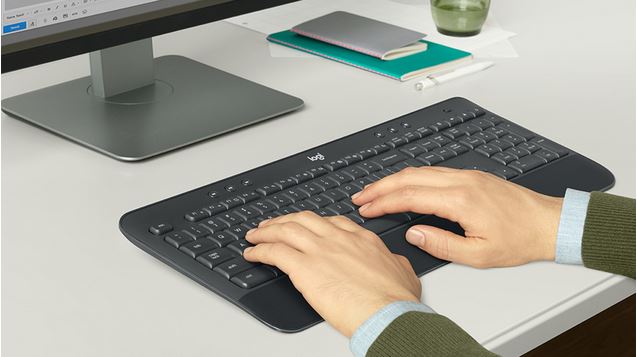 The layout is stock standard – good for home typists with the four arrow keys under the traditional Insert/Delete block instead of tucked under the Enter key. Logitech calls this ‘instantly familiar’.

It has also added an integrated palm rest that is best for hunt and peck typists (touch typists are taught to keep wrists off the rest/desk). The board tilts from flat to 4° to 8°. Powered by 2 x AA batteries that should last up to three years. it is best for home use as lettering is printed on.

The M510 is a laser style with precise tracking. It is powered by 2 x AA batteries for up to 24 months use and uses the same USB Unifying Receiver as the keyboard.

It operates with Windows, Chrome or Android devices.

I always have like Logitech kit – be it mice, keyboards, webcams, remotes and speakers. Well made, and it scoops the pool with design awards.

The key to getting the best from any mouse or keyboard is to match your needs to what it provides. This is perfect for home use.

Things you need to ask are

What do I use?

I use the Logitech G series as they are best for massive workloads and built to withstand the rigours of a touch-typing journalist.

Work: Logitech G series G613 wireless mechanical keyboard and G603 wireless mouse. I use wireless as I often need to clear the desk to look closely at review items.