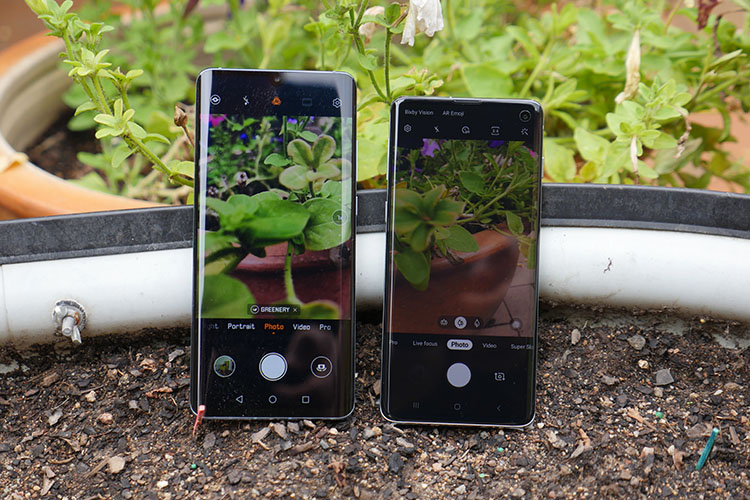 A friend of mine buys a new camera every couple of years. The camera happens to be part of an Android phone, but he doesn’t worry about the rest of the phone. It’s the camera part that motivates him. Indeed, the phone camera seems to be element in phones in which development is most vigorous, and the differences are the greatest.

Here I’m taking two of the best and putting them head to head. You can read about the rest of the Samsung Galaxy S10 here in our review. And you can read more about the Huawei P30 Pro here and here, along with our first play with its camera here.

Both phones have three cameras on the back (the Huawei also has an extra “Time of Flight” camera which it uses for some modes). Both have an ultra-wide-angle camera, a standard camera and a telephoto camera. Yesterday I took these two phones and a tripod and tried them out in some picturesque Canberra locations.

Samsung, it seems, doesn’t quite realise how interested camera photography enthusiasts might be in the facts and figures. So it doesn’t bother to put the camera specifications on its Australian website. Fortunately the global website has the details.

The Samsung phone camera has an excellent innovation on its main camera: dual aperture. That’s the size of the iris which permits light to enter. Phone camera makers have been striving to go bigger in order to let more light in, thus improving the sensitivity of their cameras. But that can be limiting in bright situations and can lead to a shallower depth of field. Samsung has a super large f/1.5 aperture, but it can stop down to f/2.4. The dual pixel sensor lets it gather more detail for creating the output.

The main camera on the Huawei is 40MP, but in most cases the output images will be 10MP, slightly lower resolution than the Samsung’s 12MP. The table below shows the output resolution of the various cameras. The Samsung matches its output to the sensor size. The Huawei does the same for the Ultrawide camera. It generates a one quarter resolution image with the Main camera unless you change the settings. And it upscales the telephoto 8MP sensor to 10MP.

The 5x telephoto camera in the Huawei phone camera is achieved by a periscope arrangement. This turns the light by 90 degrees so it can travel along a larger dimension inside the phone. The physical focal length is 14.46mm. This camera also has a  slower than usual f/3.4 aperture. That’s the price you pay for telephoto. Obviously 5x gives a lot more reach than the 2x of the Samsung.

At the other end, the Samsung phone camera has a significantly wider ultrawide camera (12mm equivalent) than the Huawei (16mm equivalent). So, if you’re constantly confronted with taking photos of large things close to you, the Samsung might work better.

First, let’s look at a standard shot with the standard camera.

And here’s the Huawei P30 Pro:

It looks to me that the Sammie does a better job of balancing the brightness, albeit with a slightly greener look to the water. However, I suspect it’s more accurate. I think the Huawei phone camera may well have recognised that it was water in the front, and blued it up a little.

Now let’s look at the boat. Here I’ve cropped out the boat from each at original resolution and put them side by side. Look closely at the images and see which you prefer, left or right. I don’t think there’s much in it when you look closely at the front boat, but clearly the one at the right has more detail on the sail of the rear boat. And look at the foliage. Again, the photo on the right is clearly better, with more and finer detail.

It’s the Samsung to the left and the Huawei to the right. Note, the Samsung stopped down to f/2.4 for this image, which should have given focus an optical boost.

What about telephoto? Here’s the same boat with the 2x camera on the Samsung:

And with the 5x camera on the Huawei:

Clearly the latter gives you a closer look, although I felt the detail was more natural on the Samsung and the colour a little better. But the problem with a big zoom is that often it can be too much. What if you want the Huawei to do 2x? Easily done with a pinch of your fingers. It’s not clear whether this is a hybrid image, drawing from the main and the telephoto camera. I think it is. Anyway, inspect the following. Samsung is left, Huawei is right. The 2x Samsung is clearly more natural and detailed than the 2x Huawei:

Now, to establish the scene, here’s the glorious monstrosity that is the National Museum of Australia from the south side of Lake Burley Griffin. This one was taken with the Huawei phone, but it doesn’t really matter. I just wanted to show where we are:

Now we’re focusing on that orange loop protruding above the building. And not at 2x, nor at 5x but at 10x. That’s the highest preset on the Huawei, and it’s called a “Hybrid” mode. It’s unfair to compare the Samsung, but I do want to illustrate how important optics are compared to even very smart upscaling.

Any phone camera has weaknesses and strengths when it comes to darker environments. The small sensor is a weakness. They are noisier and can gather less light than large sensors. But the processing power in a phone is much greater than that in a camera, so it can do some pretty heavy-duty tidying up.

I decided to use an exhibition inside the National Library of Australia for this comparison. It was darkish, so as to preserve the valuable historical documents and artefacts.

First, let’s get a sense of the width of the ultrawide modes in both phone cameras. Here’s the Samsung:

And here’s the Huawei phone camera:

You can see that the Samsung is noticeably wider, grabbing more of the scene.

Now, having taken a similar shot with the standard camera for both, I’ll crop down on one element of the scene:

To the left, as usual, is the Samsung. It went for a darker result. The Huawei routinely brightened dark scenes more than the Samsung. Overall I preferred the Samsung approach, but not so much in this case.

There’s considerably more noise visible with the Samsung shot than with the Huawei. Not, I think, because of any difference in sensor quality. It’s most likely that the Huawei phone camera applied a heavier dose of noise reduction. What’s interesting is that it seems to have been able to pull this off without doing the much damage in smearing detail. Overall, I’ve got to give this to the Huawei phone camera. Just look at the eyes of the bust, the clarity of the portrait behind the bust, the woodgrain on the hat.

Both camera phones have got a bunch of useful or otherwise features. The Samsung pips the Huawei with raw video power: it can do UltraHD at 60 frames per second. The Huawei is limited to 30. The Huawei has a crash hot “Night” mode, which I’ve previously explored. It also has a “RAW” mode, which the Samsung lacks. Both units are incredibly clever.

And both of these phone cameras are at the top of the heap compared to just about all the competition. But, overall, given the choice, and based on camera quality alone, I’d choose the Huawei P30 Pro camera. Er, I mean phone.