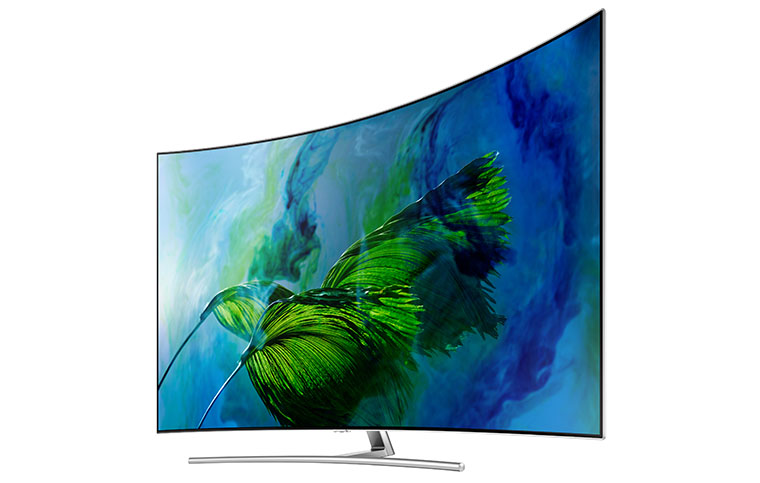 At a, let’s admit it, sumptuous event last night at the Sydney Opera House, Samsung launched its 2017 range of ultra high definition TVs, along with a quite remarkable soundbar. There were actually two TV ranges: the three models of the premium QLED range, plus several more affordable models.

With regard to the latter, I don’t have any formal material to hand so I shall go on memory alone, and be brief. These also fall into three ranges, one with a flat screen and two curved. Sizes range from 55 inches to a massive 82 inches. Samsung noted that they are able to deliver brightness levels of 1000 nits; the same level as Samsung’s Quantum Dot premium models of last year.

The greater focus was on the three QLED series TVs, the Q7, Q8 and Q9 models. These are the premium ones, showing off the best that Samsung has to offer. Theey have three main distinguishing features: high brightness with super bright colours, semi-invisible installation features, and more user-friendly smarts.

With regard to the last, Samsung has moved (with, I think, the Tizen operating system still underlying proceedings) to a bar-across-the-screen-bottom approach to control of smart features. That leaves the picture showing while you’re working out what you’re doing next. Previews of what’s available on the selection display. And when you jump from one item to another, the previous item can be paused in place, ready for you to resume from the same spot later on.

The remote control is still an arrowing-around affair (one Samsung person there quietly noted that the abandonment by Samsung of a screen pointer was lamented by some customers). Nonetheless, it seemed to work smoothly. I managed to get a play with a remote and it was indeed smooth, fairly fast and effective. And while I still prefer a pointer style remote, especially when it comes to entering text information onto an on-screen keyboard, Samsung has partially dealt with that by resurrecting the concept of a smart phone (iOS or Android) app which replicates the remote, and enhances some of its functions. Tapping WiFi passwords onto your phone is much easier than using that on-screen keyboard.

More importantly, the TV has been programmed to recognise a number of external devices such as Blu-ray players and media boxes connected via HDMI, and can automatically name them (and, indeed, give them icons in the selection bar) and allow remote control using the TV’s own remote.

Installation features? Semi-invisible? Indeed! All three ranges of QLED TVs are two box units: a TV panel and a modestly sized container for the HDMI inputs, TV tuner and other sundry electronics. Joining the two: one extremely thin optical cable.

Years ago I looked at an impressive-for-the-times Samsung TV panel which also adopted the two box paradigm. But the 8mm thick panel was limited by a signal that topped out at 1080i. This optical cable is surely good for at least ultra HD, although I don’t yet have full specs.

The thing about this cable, which appeared to be less than two millimetres wide, is that it could be easily buried in a modest and easily patched groove in gyprock. Yes, you’ll still need to provide a power connection in the wall. But there won’t be a veritable forest of cables snaking their way to a wall-mounted TV.

In addition there’s a new wall mount which is easily installed and hugs the TV closely to the wall, while providing up to six degrees of vertical tilt and some lateral movement.

And if you’re sticking with the traditional desktop mount, it now includes cable management, so both the power cable and the optical connection can be hidden away in the pedestal. The connection box can also be hidden away because the remote control can be pointed at the panel, not just the box.

And then there’s the picture quality. High Dynamic Range is the buzz word(s?) of the last couple of years, thanks in part to UltraHD Blu-ray. Whereas digital video of virtually all consumer kinds has been limited in the past to eight bits, which translates to 256 levels of brightness, UHD Blu-ray has introduced HDR10, where the ten stands for ten bits. That means 1024 levels of brightness, some of which are being added to the top of the range. Remember how I said above that last year’s Samsung TVs were able to produce 1000 nits of brightness? The Q7 and Q8 models push that out to 1500 nits, while the top of the line Q9 model delivers 2000 nits.

Yes, these are all just numbers. But I would note that I spent a fair bit of time paying insufficient attention to the address by a Samsung executive because my eyes were being drawn by a Q9. Some HDR clip consisting mainly of stained glass windows was looping, and it was entrancing. It wasn’t just that the colours that were of consistently high intensity regardless of brightness levels – if anything, the colour seemed to intensify as brightness increased – it was also that the lead cames were smoothly photographic, in fact presented as though through a window, with no sense of breaking or instability.

The Q kind of stands for Quantum Dot, the technology used by Samsung in recent years to generate precise wavelengths of red, green and blue light to mix and thereby deliver equally precise colours across the visible spectrum. I say “kind of” because Samsung is retreating from the use of the term “Quantum Dot”. I’d guess it’s to do with this being too complicated a concept in the consumer space. (The “dots” are ceramic or crystalline materials of such a size and nature as to produce specific light wavelengths upon being excited by other light wavelengths.)

Before we get to pricing, I should mention the new soundbar that Samsung demo’ed. Not quite the final firmware I was informed, but pretty startling. It was designed by Samsung’s new – very expensive I’ve been led to believe – California Audio Lab. A slim, curved model apparently designed to match the curved TV models, it packs six woofers. I confess to being sceptical of it being able to produce useful bass, but it turned out the deliver some very deep stuff indeed. I’m told it’s good down to 38 hertz, and I think I must agree.

Bass delivery by ridiculously small devices seems to be a current focus of technological research and this sound bar pulled it off. There were some very subwoofer-ish tones produced. My position in the room was constrained, so I suspect that the extremely strong notes at some frequencies, and somewhat receding ones at others, may depend on positioning.