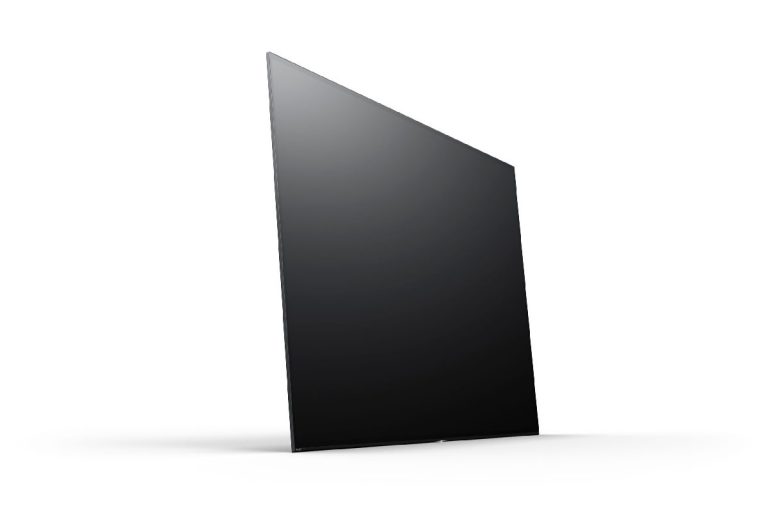 Today! That’s when Sony is releasing its OLED TVs in Australia. I suspect that these might be the most radical OLED models since LG and Samsung (which has since abandoned the field) released their original models several years ago.

The Sony A1 OLED is available today in 55 and 65 inch models, priced at a not inconsiderable $4999 for the smaller model, and $7499 for the larger one. None of this curved screen nonsense, both are flat, but both are also very different from any OLED that has come before them. Perhaps any TV that has come before.

Most strikingly, they don’t have anything resembling a traditional table-top stand. Instead they’re like a giant picture, with a section that folds back into an A-frame arrangement. The front section is the panel, and it must unavoidably be canted backwards slightly, so a lowish placement is in order. The back section is thicker, so it presumably houses the electronics and hosts the connections.

This is certainly a bold arrangement, and quite attractive. I’d suggest it wouldn’t be suitable if your circumstances demand that the TV be placed up relatively high.

That’s not all: the speakers. There are none, apparently. Instead the TV incorporates Sony’s “Acoustic Surface” technology. Basically, the whole screen is vibrated to create the sound. “This” says Sony “allows a perfect unification of picture and sound that conventional TVs cannot deliver.”

Ho hum. The unification of picture and sound is not a problem that particularly needs addressing (so long as the timing is appropriate.) I’ll reserve judgement on sound quality until I spend some time with the TV. Large panels delivering sound have all kinds of interesting effects, some of which may not always be welcome (such as weird path-length dependent interference patterns, leading to “lobing” which makes things sound different from different positions.) But aesthetically, it’s great.

(I first saw a demo of this kind of sound technology on a TV at rival’s high tech display room in Japan  a decade ago, but never in the wild so far.)

The features of OLED are well known. They include infinite contrast ratio thanks to perfect blacks, bolder colours due to that perfect black underpinning, enormously wide viewing angle and virtually instantaneous pixel switching speed.

And of course these TVs support High Dynamic Range and wide colour gamut content. And Dolby Vision, which is expected to appear on selected UltraHD Blu-ray titles in the near future. Dolby Vision expands the capabilities of HDR.

Sony has added its own touches:

Did I mention? – no, I guess that I took that for granted – that this is of course an UltraHD TV.

Sony’s smart TV features employ Android, and they’ve very well developed so, basically, they’re pretty impressive. I’ll be reviewing a non-OLED high end Sony TV in the next few days, and I expect the new OLED will diverge little on that front.