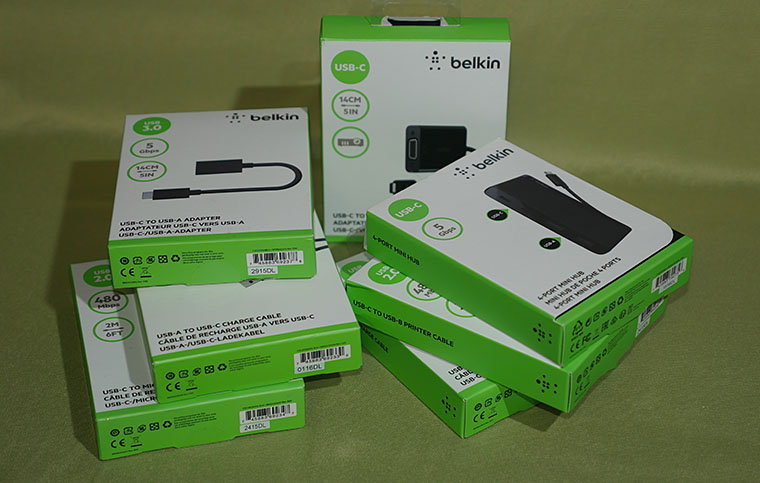 I keep prattling on about USB Type-C is taking over, and that this is good news. But, as always, switching from one standard (or from several standards in this case) to a new one can mean teething difficulties. In particular, new cables and new conversions are required.

Belkin stepped up with a bunch of cables and adaptors covering almost everything. I’ve already reviewed the Belkin USB-C to Gigabit Ethernet Adapter, so let’s look at what else is on offer. First, though, a very brief primer.

USB Type-C, or just plain USB-C, is primarily a connection, a specification for plug and socket. The data it carries conforms with one of the USB data specifications: USB 1.0, 1.1, 2.0, 3.0 or 3.1. The higher the number, the more recent and the faster.

It must be remembered that those numbers are theoretical maximums. If you plug a USB 3.0 flash memory stick into a port, the actual transfer rates will be determined by the read and write speeds of the media, not the port specification.

And that’s were we are now. All USB Type-C ports support either USB 3.0 or USB 3.1, and are backwards compatible with the older standards. With a suitable adaptor cable.

As for the USB Type-C physical connection itself, this is a smaller plug and socket, a little bigger than a MicroUSB connection, but still small enough for use on phones (eg. the Sony Xperia XZ and the Moto Z). It’s reversible, like Apple’s Lightning connector, and has rounded edges so it’s easier to plug in. It’s smarter too since it has to configure itself according to what’s plugged into what, which way around the plug is inserted and it has to tell the things into which it is plugged its capabilities. USB Type-C devices can often be charged at high levels of power (up to 100 watts compared to some of the older standards topping out at less than one watt).

All that is one reason why you should buy your USB Type-C cables from a reputable brand. A bad cable can do damage.

The main transfer cables Belkin provided ($29.95 each) were USB 2.0 compatible and thus limited to 480Mbps (which is the maximum for the devices plugged into them). They were USB Type-C to:

I had bit of a play using the first one to connect my Android phone to a new MacBook Pro (which only has USB Type-C ports). Of course nothing happened, except that the phone began to charge from the computer port. But a pop up told me to download “Android File Transfer” software to the Mac, which I did, and then I could copy stuff both ways. Copying close to a gigabyte of music from the SD card in my phone to the Mac took less than a minute.

Then there’s the Belkin USB-C to USB-A Adapter (also $29.95). This is USB 3.0 compatible (it’s labelled 5Gbps), and the USB-A end is a socket rather than a plug. So you can plug just about any legacy device into it. I used it to plug a very hot Lexar Jumpdrive P20 USB memory stick into a Mac. That same gigabyte of music took less than seven seconds to copy to the drive from the Mac, and less than five seconds to go the other way. I plugged in a keyboard. The Mac asked a few questions to identify it, and then it worked fine.

On the same theme but more broadly, there’s the Belkin 4-Port Mini Hub ($74.95). This has a USB plug (on a cable which can be pulled out from the compact enclosure) and it features two USB Type-C and two USB 3.0 sockets. If you have an Asus Zenbook 3, this is a way to expand the complement of ports. But do note, you can’t charge your notebook using this hub.

Finally, Belkin tossed in real legacy  support. Ancient history legacy support! That was a USB Type-C to VGA adaptor ($59.95). It turns out that despite my periodic cleanouts of my cable cupboard, I still have a VGA cable, so I plugged it into the projector and in moments I had a new MacBook Pro projecting its desktop onto my big screen.

So, with two exceptions, it looks like Belkin has us covered for the transition to USB Type-C. Those exceptions are a hub that permits charging through, for those devices with just one USB Type-C port intended to cater for everything, and a USB-C to HDMI adaptor.

I’d be surprised if they are far off, though.