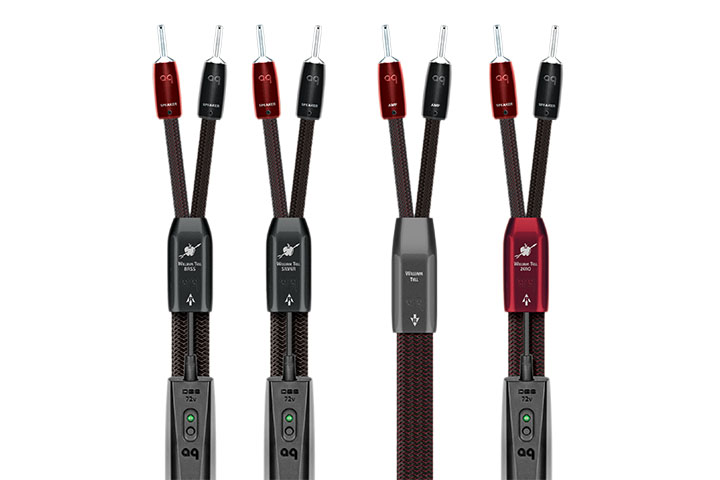 A very long time ago I stretched my budget to buy Monster speaker cables. It was so long ago I’ve forgotten the price, but it was many times more than that of the two-core power cable I’d used until then. But I’m certain that, inflation-adjusted, they were at least an order of magnitude cheaper than the cheapest of the new Mythical Creatures and Folk Heroes ranges of AudioQuest speaker cables.

The prices for the new speaker cables – for three metre lengths – range from $2,800 at the entry level to $44,000 at the high end. AudioQuest has released enough versions to finely balance, I guess, one’s hi-fi budget against performance levels, so I should lay out the full price list.

So, as you see, you have a wide range of options available to you, from the merely gobsmacking to the hilariously ludicrous.

I shall relate some of what AudioQuest has to say about this from its press release. AudioQuest says that its founder and engineer have “created what they believe are the most transparent, get-out-of-the-way speaker cables ever made.” I’m not sure about the “immersive” part, but the rest is a worthy goal. Loudspeakers and their cables should be transparent. They should get out of the way. Any loudspeaker cable that gets in the way or is less than transparent is clearly going to damage the sound of a system.

My problem with all this is that you can purchase “transparent, get-out-of-the-way immersive speaker cables” for a few tens of dollars. You don’t have to spend thousands, or tens of thousands of dollars.

Monster Cable back in the 1980s made a big splash because it drew attention to a real problem in sound reproduction. Most so-called speaker cables were far too thin. For any respectable length, they had a relatively high internal resistance, sometimes varying over the frequency range they were supposed to carry. They wasted amplifier power and reduced the amplifier’s control over the loudspeakers.

It sold thick cables which reduced losses to virtually nothing. I heartily recommend that. Fortunately, these days you can purchase essentially perfect speaker cables that cost, for reasonable in-home quantities, $4.10 per metre.

There are plenty of believers in “audiophile cables” and other seemingly unscientific things which are claimed to improve sound (and video) quality. AudioQuest has, after all, been in business for nearly forty years. That proves that there are customers ready to hand over money for such things.

The problem is, we’re all susceptible to having our perceptions altered by our expectations and beliefs. That’s why some insist that these things improve a system’s sound:

But I might be wrong, and I’m willing to be convinced. In fact, I’m quite easy to convince. Point me to a couple of properly conducted double-blind studies showing that people can hear the differences – whether it be having a rock on your gear or using $44,000 speaker cables – and I’ll be ready for some serious re-consideration.

Meanwhile, a dozen years ago there was a serious attempt to test whether different speaker cables sound different, albeit with only one (very experienced) listener. The test was first conducted unblinded. The listener was very confident he could hear the differences. When repeated blinded, his results collapsed to random chance. You can read about it from both the point of view of those conducting the test and from the listener.

Back to AudioQuest’s press release. It says that the new cables were designed to address “one of the most frustrating issues plaguing speaker cable design: the mismatch between the amplifier’s source impedance and the speaker’s load impedance”. Well, not really. There’s nothing that a loudspeaker cable can do about that other than make things worse.

“All previous attempts,” it continues, “to address this issue chose to move the speaker cable’s characteristic impedance to a value closer to the nominal impedance of the speakers”. Huh? That’s precisely the way to make things worse! Remember those skinny speaker cables from the 1970s I mentioned above? I’ve never heard of any cable vendor intentionally selling higher impedance cables. If they did, they would be incompetent.

Anyway, AudioQuest says that it has “eliminated” the “characteristic impedance entirely” in its Mythical Creatures speaker cables. Nice goal. But the only way to entirely eliminate impedance is to use a superconductor. But they involve special tanks of liquid nitrogen.

This stuff isn’t new. Way back in 2003 on an earlier (Flash Media!) version of its website AudioQuest made the claim that “S-video outputs are not necessarily better than composite”. Anyone of minimal field-related engineering competence knows that, properly designed, S-Video is significantly better than composite video. Aside from anything else, it eliminates the difficult-to-remove interference between the luminance and chroma portions of the signal. I figured that this claim was long gone, but a search of the AudioQuest website reveals this silly statement remains in its 2006 “Cable Theory” document.

As I’ve suggested, there are people all over making the strangest claims, so why single out AudioQuest? Well, mainly because AudioQuest is a long-standing, legitimate company. It does make some fine products, such as its tiny DragonFly DACs, which provide true high fidelity sound from a computer. Or its Beetle DAC, which we rather enjoyed using last year.

As far as audio goes, I’m a hi-fi guy from way back. I believe in overkill. If something provides a higher margin for error, go for it. If, that is, it doesn’t cost too much. I’m not even certain that thick speaker cables offer any particular advantage over mid-sized ones. But I’m happy to spend $5 per metre rather than $2 per metre, just to be on the safe side.