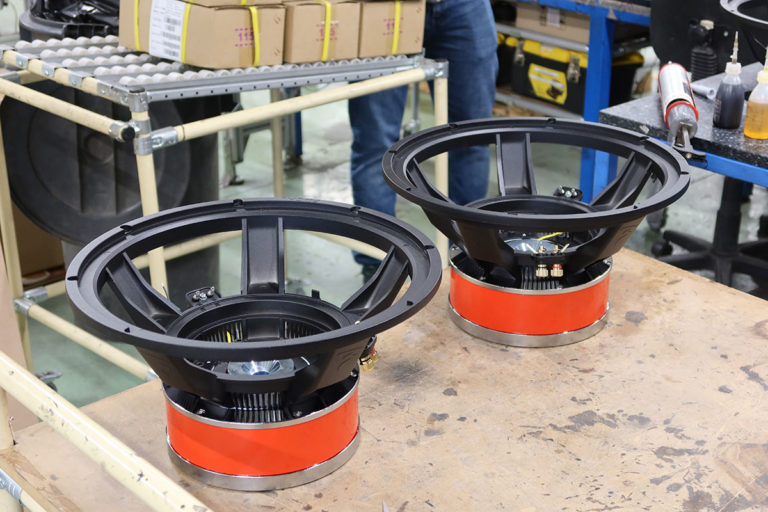 The other day I wrote about the French loudspeaker manufacturer Focal’s Bourbon-Lancy factory. That’s where it makes its wooden loudspeaker enclosures. They are finished in that factory without the Focal speaker drivers. Bourbon-Lancy has a quaint, semi-rural atmosphere, and consists mostly of homes dating from centuries past. It’s the kind of place in which you’d expect the men and women who craft cabinets to live and work.

A couple of times a week trucks take palettes full of enclosures from Bourbon-Lancy to a very different Focal facility in Saint-Étienne, a couple of hundred kilometres of the south. This is a working industrial complex, smack-bang in the middle of an industrial area. It houses Focal’s R&D, administrative workforce and where the working parts of its speakers – the Focal speaker drivers – are made, then fitted to the trucked-in enclosures. It’s also where Focal makes its headphones.

First, a reminder. The job of a speaker driver is to alternately compress and decompress the air in front of it in time with and proportionate to the musical signal it is receiving. That creates pressure waves in the air, which is what we hear. Focal speaker drivers employ the most common method of doing that: dynamic drivers. Essentially they have a cone or dome suspended in a metal “basket”. At the back of a dome is a coil of wire. This resides in a space within a strong magnet. The signal is fed into the coil. A changing electrical current generates a magnetic field. That field attracts the coil to and repels it from the magnet. And so the cone or dome to which it is attached moves, and pushes air.

We saw the aluminium-magnesium and beryllium foils being pressed into the M-shapes for their jobs in tweeters. Our guide took a shaped Al-Mg diaphragm and a shaped Be diaphragm, held them at chest height and released them. My instincts had me expecting them to fall quickly to the floor. Instead, they fluttered to the floor like feathers. The beryllium one took noticeably longer, it being lighter.

It’s the lightness and strength of beryllium that makes it worthwhile in such applications, despite its cost – it’s more than $US150 per ounce and toxicity when being worked. The chap forming the beryllium tweeter diaphragms was wearing a full-body isolation suit … although it looked like the room was vented to the outdoors.

And we saw the conveyor belts carrying every single one of the Focal speaker drivers – not merely a sample of them – to a station where an employee placed them into cup and ran a test signal through them. It only took a second for the analyser to pronounce “PASS” or “FAIL” on a computer screen. And, yes, I saw a couple of FAILs. There were several such stations.

After that, the workers bring together Focal speaker drivers and their enclosures. In the more expensive models, one worker is responsible for fitting the drivers and crossover networks, as well as inserting the internal speaker padding, essentially finishing the speaker. Staff keep an eye on finish quality. They inspect the speaker under a light array designed to show up defects in the finish before driver installation, and again afterwards.

Also in the facility is an anechoic chamber. The company tests the speakers in the more expensive ranges to ensure compliance with “standard” models.

And that’s it: Built in France, in two facilities a couple of hundred kilometres apart, the source of all Focal cabinet loudspeakers.