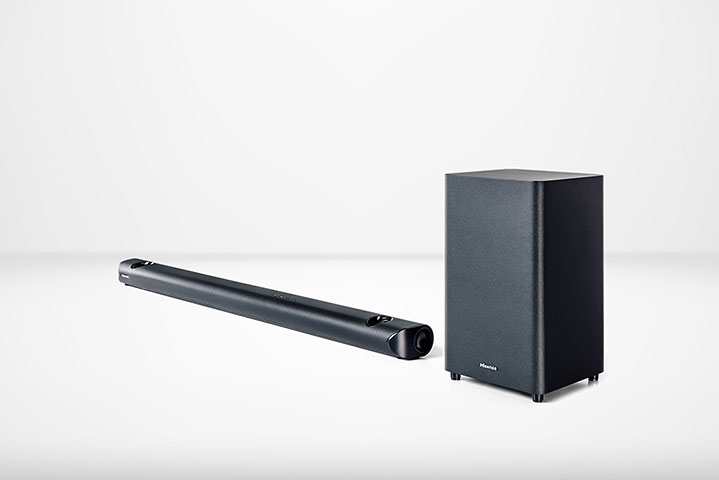 Hisense is perhaps best known in Australia for its TVs. But over the past few years it has been expanding its offerings. It now has fridges, air conditioners and soundbars. The Hisense HS512 is the company’s top-of-the-line soundbar.

That model number has meaning: 5.1.2 is a one of the preferred speaker arrangements of we home theatre types. The 5 is front, centre and surround, the 1 is the subwoofer and the 2 is the number of overhead channels. The Hisense HS512 supports Dolby Atmos and DTS:X.

There’s not all that much information about the soundbar on the website or in the manual, so I’ll just lay it out in full, thus:

To expand a little, there are several options for feeding a signal to the Hisense HS512. The main way is via one of the two HDMI inputs. Both of these pass through video signals up to UltraHD. Another way is back down the HDMI output from the TV using the Audio Return Channel support.

Then there are the two digital audio inputs, both coaxial (ie. electrical) and optical are provided. And there’s a 3.5mm analogue audio input as well. And you can connect your phone to the soundbar via Bluetooth.

The soundbar is 1,200mm wide, but rather slender at 73mm tall and 110mm thick. What I found impressive was the subwoofer. Usually the wireless sub packaged with soundbars gets by with a small driver, with consequent limitations in bass performance. This one comes with a 200mm downwards firing driver in a bass reflex loaded enclosure. The box is larger than usual, too, at 420mm tall by 240mm by 240mm. The port is on the same side as the power connection. In general I’d prefer it weren’t because you typically want the power connection close to a wall to hide it, but the port needs a bit of breathing room.

There’s a pairing button on the sub, but I didn’t need to use it.

It’s unclear how much of the claimed 380 watts the subwoofer gets.

Now, back to the soundbar. Eleven speaker drivers, huh? Where did they put them all?

Well, four are obvious: they don’t have grilles over them. There’s one of those on each end of the bar, pointing out to the sides. And there’s two on top, one near each end, firing mostly upwards, but slightly forwards, out into the room.

I located the rest by peering closely through the metal grille, using an artfully directed torch. Two more upwards-firing drivers are next to the exposed ones on the top. They also are slightly canted forwards. But those hidden ones seem to be smaller, and recessed into something of a horn. Presumably that increases their directivity for firing up at the ceiling.

There are four drivers across the front firing directly out into the room. Two are close together near the middle and the others are each about 300mm in from their respective ends.

Setting up the Hisense HS512

Well, there was clearly something in there. It looked like the end of an angled tube, with its aperture pointing further to the left. My guess is that it’s a bass reflex port, but that leaves us at ten speaker drivers, not eleven. Perhaps there’s an internal woofer behind that. You wouldn’t use it for high frequencies because it would wreck the spatial balance.

Installation took me maybe three minutes. I pushed back my TV a little to make room, put the bar in front of it. I pushed aside my usual subwoofer and put the Hisense one in its place. Plugged in the HDMI cables – one for connecting the soundbar to the TV is included – and the power and it was done. Except, that is, for adjusting the bass, but I’ll return to that.

Also included with the soundbar and the HDMI cable are wall brackets, so it’s ready to be wall-mounted, along with a 3.5mm to 3.5mm audio cable.

The Subwoofer … where to put it?

I am a confirmed corner guy. I’ve measured the output from subwoofers from all kinds of different places in my room, and the front corner always works best. That’s why I pushed aside my regular subwoofer and put the subwoofer from the Hisense HS512 system in its place.

Big mistake. It sounded quite disconnected from the soundbar, as though its bass was only loosely associated with the upper frequencies. That was in part because the level was way too high for that position. A corner placement boosts bass output. I ended up turning down the subwoofer level to the minimum possible, an indicated “-9” to try to get balance. Yet it was still disconnected.

I did some measurements and found the cause: there was a big gap in output between 100 hertz, above which the subwoofer’s output was diminishing rapidly, and 230 hertz, below which the soundbar was also diminishing. Thus the disconnection.

So, I broke my rule and put the subwoofer right next to the soundbar, far from corner. That balanced things quite a lot, lifting the output floor between the two units’ prime competencies. I’d suggest you do the same.

I ended up settling on an output for the subwoofer of an indicated “-4”.

With that setting, the system produced respectable output all the way from 40 hertz up to beyond 20,000 hertz. The subwoofer seemed to have a peak a little above 50 hertz, and fell away quite rapidly below that. There was still a hole between 100 hertz and (now) 220 hertz, but with a higher floor. Above that the output was kind of even to around 2,000 hertz, and then diminished by around 6dB to a new level, which it maintained out to 20kHz.

Just looking at those raw numbers, it seems quite inaccurate. But in practice, it produced a clean, almost mellow sound, in large part due to the restrained treble.

In a second we’ll do some listening. But first, in a home theatre system it’s important that the video be properly handled. And, indeed, it was. I pulled out a few UltraHD Blu-ray discs. The routine stuff was fine. But so was the harder stuff. Dolby Vision-encoded video signals passed through properly, as of course did the easier-to-handle HDR.

And so did UltraHD at 60 hertz. There isn’t much of that stuff around so far, but people like Ang Lee keep making High Frame Rate movies so we’re likely to see more of it.

The USB input is of limited usefulness for a couple of reasons. One is that it only appeared to support MP3 files. At least it wouldn’t play FLAC or iTunes-style AAC. The second is that there’s no way of choosing music. It just plays songs in order. Still, for parties and such you can load up many hours of your favourite MP3s onto a thumb drive and just let it run. You can skip tracks, skip back and play/pause using the remote control.

Listening to the Hisense HS512

First things first: the Hisense HS512 claims to be able to do Dolby Atmos. So I span up a Dolby Atmos disc and two things were apparent. First, the unit recognised the signal and displayed “Dolby Atmos” on its front.

Second, it sounded, well, Atmos-y. I went to my well-used Dolby Atmos test disc, and played the “Leaf” trailer. The amount of “height” sound was astonishing. A bit more, if anything, than usual. Those top speakers really pump out the sound.

Then I ran the Transformers: Age of Extinction trailer and again, the surround effect, particularly overhead, was excellent. In reality, there was virtually nothing behind me in sound, but the strength of the overhead performance kind of papered-over that.

There is also an Enrique Iglesias music video on that disc. “Bailando” – a hit in 2014 – was delivered with superb rhythm and punch, and again with a that all-around-and-overhead sound one would expect from Dolby Atmos.

I’m actually a bit irritated, because this track sounds almost as good as it does on my regular system … and that’s a system that’s closer to $10K.

At this point I should note that the soundbar goes remarkably loud while remaining clean. As I’m writing right now, I’ve got the Muse album Showbiz running at a ludicrously high level. It challenges soundbar systems twice the price for this level of performance.

But it doesn’t challenge my proper, discrete, 5.1.2 system with all the tests. I use an old disc – DVD Video Essentials – to test that all the channels are working properly. And they were.

But then something interesting happened. The test disc includes a Dolby Digital 5.1 track with a narrator being panned in a circle around the circumference of the room. There wasn’t much aural evidence of it when he was supposed to be behind me – he just sounded relatively disembodied. But the interesting part was when he panned across the front. When he was in the centre channel, he sounded just as he ought to. But when he was in the left or right front position, all the bass tones disappeared from his voice and he sounded extremely thin. It was as though in setting up the soundbar processing, the designers had forgotten to set a bass crossover for front left and right.

Well, with surround material anyway. It all worked perfectly well with stereo sound.

I confess: I had the Hisense HS512 soundbar in my storage space for a couple of months. I wasn’t all that keen to write the review. I expected a dissatisfying performance and the hassles that sometimes go with such a review. (Not, I hasten to say, that the Hisense people have ever been anything other than pleasant in my experience.)

Hisense’s website for this unit is here, but you won’t find any more information there than I’ve laid out here.

Features
Value for money
Performance
Ease of use
Design
Good sound quality
Easy to setup and use
Excellent value for money
Doesn’t seem to handle bass properly on left and right channels when in surround mode
4.5