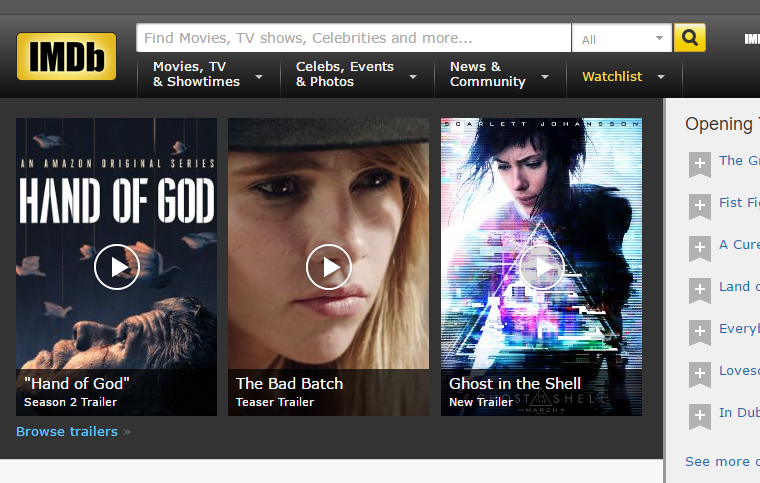 Movie junkies – well, this one at least – usually keep a browser tab open on IMDB. That’s the Internet Movie Database. This is the site that has incredibly detailed records of around 4.1 million movies and TV shows, along with biographies on nearly eight million actors and crew. Plus seventy million registered users, so I guess I’m not alone.

It must be one of the oldest significant public resources on the Internet. Started as a usenet (an Internet board system that was around for years before the web) list back in 1990, before the Web was invented, it was migrated to the Web in 1993 and then sold in 1998 to Amazon. If you want to know something about a movie – including the identity of that vaguely familiar looking extra playing a taxi driver in some movie, or what the original aspect ratio of the movie was – then there’s no better place for at least starting.

And, of course, it features the famous list: the IMDB Top 250, ordering the best movies ever made rated by user votes. Presently The Shawshank Redemption heads the list, while the 2014 Indian movie PK is currently holding position 250.

Now, one early feature is being retired: its message boards. If you click on any of these it will be headed by an announcement that the boards will cease operating on 20 February 2017. IMDB explains:

After in-depth discussion and examination, we have concluded that IMDb’s message boards are no longer providing a positive, useful experience for the vast majority of our more than 250 million monthly users worldwide. The decision to retire a long-standing feature was made only after careful consideration and was based on data and traffic.

No doubt this is in part due to a proliferation of trolling, but maintaining such things are probably very expensive too in terms of human resources.

I gather than it isn’t merely that you won’t be able to comment any more, but that the whole thing is going to be deleted. If you have any messages on the IMDB’s boards that you want to keep, note its suggestion:

Because IMDb’s message boards continue to be utilized by a small but passionate community of IMDb users, we announced our decision to disable our message boards on February 3, 2017 but will leave them open for two additional weeks so that users will have ample time to archive any message board content they’d like to keep for personal use. During this two-week transition period, which concludes on February 19, 2017, IMDb message board users can exchange contact information with any other board users they would like to remain in communication with (since once we shut down the IMDb message boards, users will no longer be able to send personal messages to one another).

This does not affect the User Reviews of movies, which will remain available and which all users may continue to contribute.