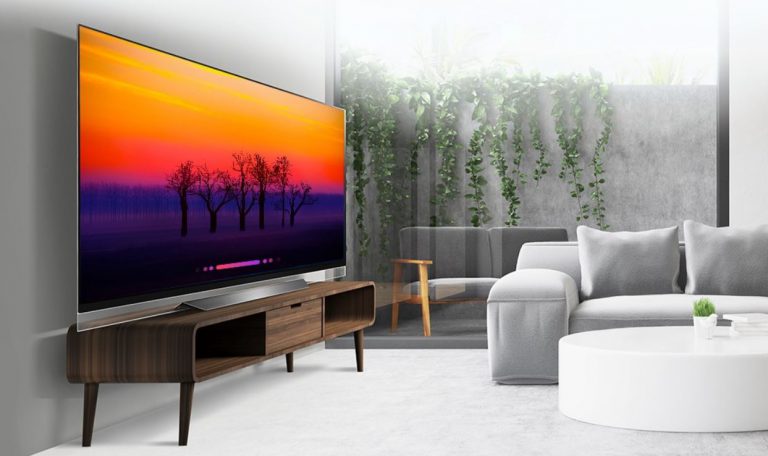 The Museum of Contemporary Art, the home of Australia’s thriving modern art scene was a fitting backdrop for the LG 2018 TV release. Some of its TVs even have a gallery art display feature.

You may not be aware that LG is a Major Sponsor of Innovation and Learning with the Sydney’s Museum of Contemporary Art (MCA). The museum runs several creative learning programs for kids that aim to encourage looking, thinking and creating in new ways.

The ever-affable Angus Jones, General Manager of Marketing for LG Australia said that there was now only one LG Smart HD (1080p) TV (610) in LG 2018 TV range (for clarity the rest are 4K).

“LG is all about igniting your viewing passions be it sport, movies, free to air or streaming. Technicolor now endorses LG OLED. The partnership adds a new picture pre-set featuring HDR and colour settings optimised by Technicolor. The most accurate colours now become Hollywood colours too,” he said.

LG also revealed that 7 million Australian’s use Freeview now to stream both catch-up TV as well as live HD TV instead of over-the-air. NBN speeds and unlimited data packages have enabled that. Also, 66% of Netflix viewing is on a large format screen (not mobile).

“LG is about giving you the best possible image quality for your budget. If you buy OLED, you get our latest Alpha A9 processor that gives these TVs far more power. That means better colour gradients, faster processing, and more. But more than that it is about a new ‘medium’. What else you can do with the panel?” Jones said.

“Globally and locally we work with some of the best in the business such as Netflix, Dolby, Meridian and Google to name a few, to bring their expertise and experience into our products. Based on these partnerships our focus is on continuing to offer Australians premium cinema viewing experiences in the comfort of their own homes.”

LG is a new creative medium

Jones introduced Ted O’Donnell and Viki Lee  (photographer and artist respectively) to talk about TV as a new artistic medium. LG already offers a gallery app that turns its Super UHD and OLEDs into a picture frame replete with masterpieces or your photos.

O’Donnell and Lee saw the LG panel as a creative medium like an electronic canvas. Its high refresh rates, one billion colours, HDR/Dolby Vision, allowed them to create a new living art form displayed on LG’s OLED panels. He raved about its ability to accurately reproduce colours – especially red.

Let’s ThinQ about it

All LG 2018 TV models come with ThinQ – LG’s AI functionality. That could be an important differentiator when buying a TV – added value.

Jones said that by 2020, 30% of all search would be via voice. LG 2018 TV models will support both Google Assistant for what it does best – search and smart home control – and ThinQ for its TV functionality.

“Think of ThinQ as a ‘client’ built into LG’s webOS to give an enhanced interactive experience by employing Natural Language Processing (NLP) to deliver intelligent voice-activated control,” Jones said.

In the TV’s case, ThinQ understands a broad spectrum of natural expressions, such as “volume up”, “raise up the volume”, “make the TV louder”, “sound is too quiet” – and more. LG Smart ThinQ works hand-in-hand with popular streaming apps and the Electronic Program Guide (EPG) to deliver real-time information offering the content consumers want most.

To reinforce the move to AI controlled devices Jones introduced Toby Walsh a leading researcher in Artificial Intelligence. The Australian newspaper named him as a “rock star” of Australia’s digital revolution.

We journalists are a techy lot, so the conversation was all about Terminator’s Skynet and who would win – Apple with Siri, OK Google, or Amazon Alexa (note that Cortana and Bixby were non-starters).

“There can only be one in the future if we are to harness AI truly. But there can be lots of clients like ThinQ that can add local processing, skills and intelligence,” he said.

“I know Siri’s inventor, but Apple has really let it down since they bought the company. Who do you think (asking journalists) will win and who can you trust with this enormous power?” Answers seemed to favour Google.

“The general phenomenon of Artificial Intelligence – or AI– is beginning to permeate our lives. Ultimately every device will be listening; waiting to follow our commands and answer our questions. It’s the next level of robotics. But for the everyday items that we rely on the most that also makes it one of the biggest technological and social changes we have seen in decades. What makes this even more exciting is that LG is making AI a reality and we see quantifiable changes in the way we can go about our lives; freeing up time and making things easier,” said Walsh.

All prices quoted are in A$. Available from April 2018.

OLED is still the best

OLED is without a doubt the best current TV technology. LG has, largely on its own on its own, pioneered this technology and built awareness of the key issues. These include perfect blacks, pixel level dimming, realistic colours, lower power use and HDR/Dolby Vision.

OLED has only one very minor weakness – it is best viewed in subdued light to let its blacks and colours explode out of the screen.

In broad daylight (behind the panoramic full-height glass at MCA) you can see the difference between LED and OLED. OLED colours and blacks are better and sharper. The full backlit LED Super UHD is brighter and colours a bit more saturated. Both are excellent and share similar refresh rates, 10-bit colour, Dolby Vision (a superset of HDR), Dolby Atmos sound, magic remotes and more.

Last year Sony and Panasonic joined the fray and source panels from LG. They would like you to believe their points of difference are in their electronics and custom tuning. Conversely, LG has been doing OLED far longer.

No matter which LG model you buy you can be sure of two things. You have a better TV viewing experience (compared to your present TV) and next years models will be even better – damn.

OLED is best. That is not to take away from the massive strides in LED/LCD UHD TV. LG’s fully-backlit LED Super UHD sets are impressive. They use a full-array backlight (the entire screen is lit from behind in small zones) instead of an edge-lit strip from the bottom of the screen.

The LG 2018 TV range will excite your passion for TV viewing. We will cover LG’s Dolby Atmos sound bar and smart speaker offerings in a separate article.

ThinQ is interesting, even more so if you enter the LG ecosystem and buy their range of smart appliances. It works with OK Google or Amazon Alexa to do the heavy lifting by having access to the device’s operating system. I suspect client’s like ThinQ will be invaluable as the interface to Google.