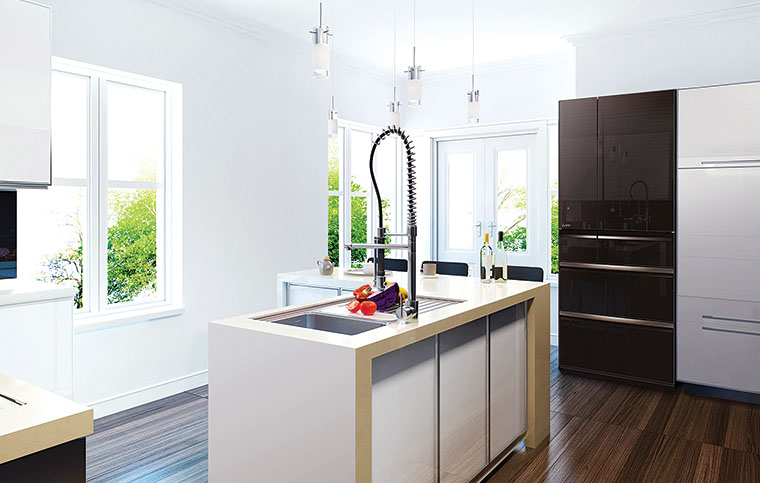 Could it be that stainless steel is about to depart our kitchens? Mitsubishi Electric has just launched a slimline, drawer-laden refrigerator in two colours: Diamond White and Dark Mahogany. The Dark Mahogany finish features a subtle horizontal grain. Both colours feature a glass front.

The Mitsubishi Electric MR-WX627Z ought to be easy to fit into those tighter space, thanks to being just 685 mm wide, despite offering a 627 litre volume.  There are five storage zones to allow access to everything: two full width drawers at the bottom, two narrower drawers above them, and then a conventional space above with twin doors.

The fridge is fitted with a “Versa” drawer with Supercool Freezing, Soft Freezing and Hot Freezing. The last one lets you put in stuff at a temperature of up to 80 C. Supercool runs at -3 C to 0 C, not quite freezing food in order to keep it ready to be immediately cooked.

The fridge incorporates an ice maker.

Inverter technology is used to vary cooling for a continuous optimum temperature, eliminating the harsh on/off cycle of many fridges. It has been awarded a 3.5 star energy rating.

The Mitsubishi MR-WX627Z is made in Japan and has a five year warranty.