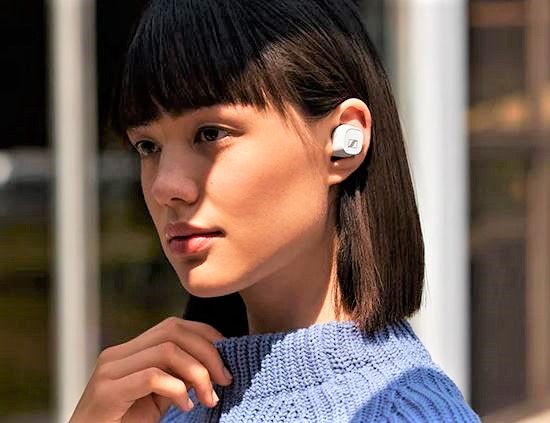 The boss has already reviewed the Sennheiser CX 400BT true wireless earphones here. But I wanted to weigh in as well, mostly on how these $299.95 true wireless earbuds sound. After all, we differ a little in our approaches to our listening, and maybe even a little in musical taste. So what did I think?

(You can read all the facts and figures in the earlier review. Me, I’m going to jump straight to the listening part of things.)

Before we start listening, I should note a couple of things. All my remarks here are based on streaming content from TIDAL – that is, losslessly compressed – on a Huawei phone which, like the Sennheiser CX 400BT true wireless earphones, supports the aptX codec. The phone confirmed that aptX was indeed being used.

I installed the Sennheiser Smart Control app on the phone, but not to fiddle with the EQ. I wanted to make sure that the buds’ firmware was up to date … and to switch the play/pause touch control from the left bud to the right. Nearly everything works that way around and by switching it over, I avoid a lot of accidental invocations of Google Assistant.

So, I opened up “My Collection” in TIDAL and scrolled down through the albums. The striking cover of Rage Against the Machine’s self-titled debut album caught my eye. First impression: an open, truly high-fidelity delivery. There’s something about high-end gear that stands out in an almost indefinable way. Whatever it is, these earphones have a fair helping of it.

To describe things a little more analytically, this album is remarkably dynamic, and a lot is going on both during the loud and quiet bits. The “no more lies” build up in “Take the Power Back”, with the cymbals floating there slightly to the left was simply beautiful. And when the band breaks into a full delivery, the drum kit seemed to be unrestrained, bouncing through the mix in a quite exciting away.

The vocals on the next track, “Settle for Nothing”, exhibited just a slight sibilance. I’d be inclined to pull down the 4kHz region by a couple of decibels to tame that. But that would be the only (very slight) weakness in tonal balance. As the loud part of this track is interrupted by an unusual guitar interlude, again accompanied by those floating cymbals, the drum strikes come through with real authority, a true sense of really being there.

The Billie Eilish track “When the Party’s Over” was nicely handled, with the strong, deep bass elements being delivered in full. I was inclined to think that perhaps the bass wasn’t quite as high in level as I was used to … but then I had to consider that perhaps the other things I was listening with had it up too high in level. And then I started wondering about how extended the bass really was.

Quite extended, as it turns out. The title track from The Doors’ 1967 album Strange Days has some clearly accidentally deep thumps – they’re centred around 25 hertz – and they were clearly conveyed by the Sennheiser CX 400BT true wireless earphones.

A change of genre: “I Want You” from Elvis Costello’s 1986 album Blood and Chocolate. The vocal presence was strong. Costello was right there. Still a bit too close to a microphone that was a bit too bitey on the treble. Again, a couple of dB of diminution in the upper midrange, lower treble would fix that. But that couldn’t take away from that real presence.

Maybe a bit of EQ after all

But, but, but … I’d promised to leave the EQ alone, but why not check it out? It could perhaps take out that slight zing and make things that much smoother. The are two EQ interfaces in the Smart Control app. One is a three band system with bass, midrange and treble sliders. The other is a weird system where you move your finger around on the screen and the underlying dot is coupled with the tonal balance in an inscrutable way. You just move things around until they sound the way you want them. Fine tuning was limited. I could pull down that zing, but at the cost of killing more upper frequencies than I wanted to. In the end I returned the EQ to no effect.

But it did make me wonder: if you do apply EQ, how does it work? I mean, does the Smart Control app keep running in the back, intercept the sound from the music player app and apply its EQ? Or does it set parameters for processing within the Sennheiser CX 400BT true wireless earphones themselves?

To test, I dragged the treble down to a deadened level, then switched off Bluetooth in my Huawei phone. I fired up an iPhone 8 I keep for just this kind of thing, paired the earphones to it – the iOS version of Smart Control app was not installed on it – and played the same song from TIDAL. Yes, just as dead. Clearly the EQ happens within the earphones. The app is just the controller.

Finally, some chamber music – with, I hasten to add, the EQ returned to flat. I played the Cypress String Quartet’s rendition of Schubert’s String Quintet. For the most part this was beautifully sweet in a most unBluetooth, unearbud way. That sibilance-inducing treble boost seemed to be completely absent in the two violins in the quintet. Occasionally the upper bass was a touch crowded when the two cellos were hitting climaxes, but apart from the performance was immaculate.

I also did my standard walk-away test to see for range. How far could I get before there was any loss of Bluetooth signal with the Sennheiser CX 400BT true wireless earphones. Just ten metres, it turned out. Oh, I could go a lot further away while retaining a connection, but when I turned my head so that it was between the phone and the right earbud, ten metres was tops. Remember, these earphones connect to your phone via the right bud. You can take the left and put it in the case while continuing to use the right one, but not the other way around.

You can check out some of our other Sennheiser reviews here. Sennheiser’s site for the CX 400BT earphones is here.