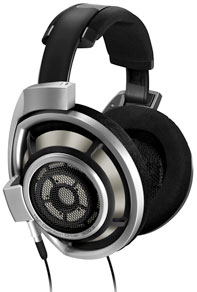 A few years ago now, as a lowly hi-fi sales assistant in London’s Covent Garden, I can lay claim to having sold a pair of Sennheiser’s most expensive headphones. The Orpheus was a gorgeous reference electrostatic headphone driven by its own high-end valve amplifier and the American customer who bought the pair from me was lightened of some £10,000. At today’s exchange rate, that’s around AU$22,000.

Sennheiser recently launched its latest flagship pair of ‘cans, the HD 800, which at $2399 a set have a much more palatable price tag. Let’s face it, though, it’s still a lot of cash.

Top-end Sennheisers are usually something to get excited about, and owning a pair of HD 600s myself I was keen to learn just how much better, if at all, the step-up 800s were.

Handmade in the factory in Germany – like all Sennheiser designs – the HD 800s are an open-backed circumaural design, meaning there’s some outward sound leakage. Sennheiser says the patented 56mm transducer (the part that converts the electrical signal into sound) is the largest ever incorporated in a pair of headphones. Transducers with a large surface area are better at generating full bodied sound and solid bass levels, but typically also generate distortion. Sennheiser claims to have overcome this by developing a ring-shaped transducer. While this actually has less surface area than a conventional circular transducer of the same dimension, it manages to vibrate the same volume of air above it, according to Sennheiser.

The doughnut-shaped drivers are angled from inside the ear cups at 45 degrees to the ear canal. This emulates the way sound arrives at our ears from a pair of triangulated stereo speakers, making the listening experience more natural.

Solid and mostly metallic in construction, the HD 800s are still very comfortable thanks to luxurious touches such as ear pads made of a Japanese man-made fibre called Alcantara, which is also used as a high-quality interior fabric in the automotive industry. The three-metre cord doesn’t get in the way either, and is constructed from four-core Teflon insulated cable.

First up, know that these cans are not intended for use for portable players such as iPods. These devices won’t drive headphones like the HD 800s because they simply can’t handle the high impedance (ie. electrical resistance) presented to them. I ran the HD 800s straight off a dedicated valve output from a Shanling Super Audio CD player as well as via a $1,549 Lehmann Black Cube Linear headphone amplifier, which was supplied by Sennheiser’s Aussie distributor, Syntec.

Direct from the source, the HD 800s sounded sublime and delivered an incredibly open performance that was intoxicating in its freedom – very much like listening to a I started out with an ‘audiophile’ recording of Patricia Barber’s album Companion and was soon lost in the atmosphere and sultriness of the vocals. The midband is smooth – but not overly so – and superbly focused. Bass is rich and warm and makes everything from classical to dance music sound big-boned and mightily impressive. This is something that helps makes the HD 800s far more suited to a wider range of musical styles than the HD 600s and other previous models, which tend to shine with classical or jazz and don’t really ‘rock out’ so much. The HD 800s also leave the 600s for dead in terms of the sense of sheer openness and space. While the 600s are good here the 800s are in a different league, providing far more ‘air’ around instruments and creating a much wider soundstage between your lugholes.

Hours later, and with CDs scattered all over the listening room floor, I was still going and the HD 800s still felt comfortable. So they’re hardly a chore to listen to for long periods, with a smooth, extended treble that never bites or sounds shrill. Sure, they are highly revealing, so feed them a poorly recorded CD and the Sennheiser’s will show it up warts’n’all, but with quality recordings they shine.

The Lehmann amplifier proved an ear-opener too, extracting even more sonic strength from the HD 800s. If you’re looking at spending this sort of money, a quality headphone amp is a wise investment.

Sennheiser has done itself proud with the HD 800s, which are some of the best-sounding ‘phones that you can stick on your head. Great sound is worthless, though, if headphones ‘wear’ like an anvil or vice, so the HD 800s offer the twin benefit of being superbly comfortable. They are best paired with a good-quality dedicated amplifier, but if you’re the type to consider a $2,000-plus headphone purchase this item is probably already on your musical to-do list.