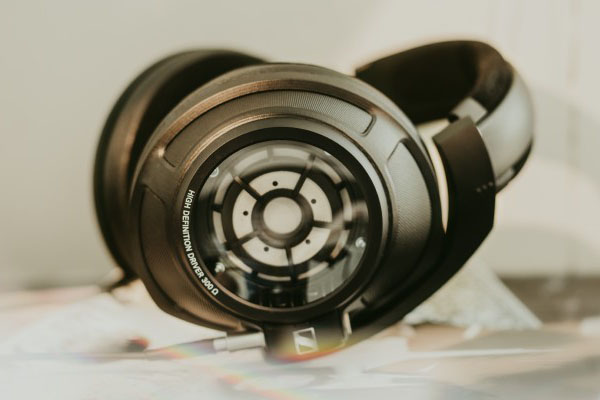 Headphone fans, indulge me for a moment with your envy. As I write these words, I have wrapped around my head the new Sennheiser HD 820 headphones. Let me tell you about them.

That these are high-end headphones becomes undeniable once you see the packaging. Yes, there’s a cardboard box. But inside the cardboard box is a large, black wooden box, with carefully sculpted insets in the foam rubber to hold and protect these headphones. Part of the reason for that is that one of the materials used in their construction is glass. Both earcups have a glass panel on the back, sealing the cup while allowing the eye to linger on the internal drivers.

These are large headphones. They go around your ears, of course, and the cups are spacious. There was no sense of my ears being crushed into them. They are specified to have a contact pressure of 3.4 newtons, plus or minus 0.3. We all have an instinctive feel for newtons as a unit of pressure, don’t we? In fact, the word “pressure” is being used colloquially. What’s specified is force, not pressure. 3.4 newtons is equal to a third of a kilogram of weight.

It feels like a comfortable pressure on the sides of my head. They don’t grab tight because they aren’t intended for you to wear while on the move. But neither do they feel particularly insecure.

You can forget about codecs. These headphones are wired. They come with three cables. Each is three metres long, thick and covered with woven fibre. Why three? At one end, all three are split into left and right connectors, so there’s no difference there. But there are different connections at the other end. One is a regular 6.35mm (1/4 inch) stereo jack. Same old, same old.

The other two are balanced connectors. One is a four-pin XLR connector; the other is a 4.4mm Pentaconn stereo plug.

In case you’re unfamiliar with such things, stereo headphones normally use three wires. One is the signal wire for the left channel, one for the right, and one is the “return” for both. The industry calls that type of connection “unbalanced”. “Balanced” connections have two wires for each channel, keeping them entirely separate. Aside from some mild improvements in noise rejection (not normally much of an issue at the levels of headphone signals), these tend to improve crosstalk or leakage between channels.

But most consumer gear doesn’t support balanced connections. Use these headphones with a typical stereo amplifier and you’ll use the 6.5mm cable. (Want to go portable? Then consider a high-end portable music player. Or buy a 6.5mm to 3.5mm adaptor.)

Of course, the Sennheiser HDV 820 amplifier supports all three kinds of connections. It even has two sockets for the Pentaconn. But it doesn’t have a 3.5mm output but does have a 3-pin unbalanced XLR output.

It also has analogue inputs and a USB Type-B socket for connecting to a computer. That’s how I used it: listening to network audio from my Network Attached Storage.

The response is actually more complicated than that. Sennheiser goes to some lengths to explain that it matches the headphones not to some theoretical straight line on a graph, but to what it calls the “diffuse-field frequency response curve” produced by eight “highly-linear” loudspeakers in an anechoic chamber. (Anechoic chambers absorb all noise reflections.) A “large number of test persons” are used to achieve this match. From this it develops a reference response, and it aims the individual headphones at that.

The headphones come with a glossy manual along with a USB memory stick. On the stick is another copy of the manual, along with a PDF certificate showing the individual calibrated response of the particular set of headphones you have purchased.

Sennheiser rates the headphone impedance at 300 ohms, their sound pressure output at 103dB for 1 volt RMS input and their maximum long-term power handling at 500mW.

That mix of units requires some explanation. 1 volt RMS into 300 ohms equals (nominally) 3mW. Assuming linearity, 500mW is 22 decibels more than 3mW, which means that the headphones should be able to produce somewhere around 125 decibels. Which is way more than any reasonable person could handle.

Sennheiser does not rate the maximum voltage or power output of the HDV 820 amplifier. I’d guess it could manage the 500mW well enough, judging from how things sounded.

The amp supports all manner of digital signals. I listened to music in standard resolution, and in high-resolution formats with up 352.4kHz sampling. Plus, a lot of Direct Stream Digital format music, including some at double speed. I could not get DSD256 (i.e. quad speed) to work. That was due to a configuration issue with Foobar2000, the high-resolution music player on my computer.

Did I mention that these are closed-back headphones? One of the oddest things about the Sennheiser HD 820 headphones is that they don’t sound like closed back headphones at all. Sennheiser popularised the idea of having the rear of the drivers in the headphone venting to the outside world. That had the downside of letting in more sound from the outside world and sharing more of what you’re listening to with those around you. But it also gave a more open, expansive feel to the sound.

That’s what these headphones also deliver. Not, to be fair, quite as open and airy as my old Sennheiser HD 535 headphones, which really are open backed. But way more open than any closed back headphones I’ve ever heard.

In other words, they sound like open backed headphones, but without the downsides.

The overall tonal balance is fairly bright, but it’s a sweet, pleasing brightness. And it lends an extraordinary detail to the music. There is nothing left to the imagination. Nothing at all.

I spent a couple of hours of just luxuriating in a bunch of live-recorded DSD tracks from audiophile label Blue Coast. In addition to the detail, there was a pleasing “distance” from the music, rather than any sense of it being force-fed into my ears. A bit like high-quality loudspeakers, but without damaging room reflections.

And then there’s the bass. The deep, deep and astonishingly powerful bass delivered by these headphones. Bach. Organ. Passacaglia and Fugue in C minor. 16 hertz. It was all there, the bottom C pedal, unattenuated, full, precise, clean and throbbing. Oh, while I was at it, I played both of the famous Telarc 1812 Overture recordings, from 1979 and 2001. Unlimited power. And just as importantly, the gain on the headphone amplifier was sufficient to deliver a level that you simply won’t get from any loudspeakers that aren’t at least equivalently expensive.

More mundanely, Joe Jackson’s 1980s album Body and Soul was gorgeous. Jackson pushed for the highest possible recording standards for this one, and the Sennheiser HD 820 headphones reveal it in all its glory. I listened to this one way, way too loud because the headphones remained easy on the ears despite the elevated level. The bass guitar was tangibly there. The attack on Jackson’s piano was precise and powerful, yet it remained sweet. Drums pierced the mix to the exact, correct level.

When I was contacted by Sennheiser to do this review, I wrote to them: “to be honest I was a little reluctant to ask for these for review. Purely selfish reasons. I can’t afford to buy at this level, and I fear that they may spoil me for other headphones.”

I fear that the Sennheiser HD 820 headphones have spoiled me for other headphones.