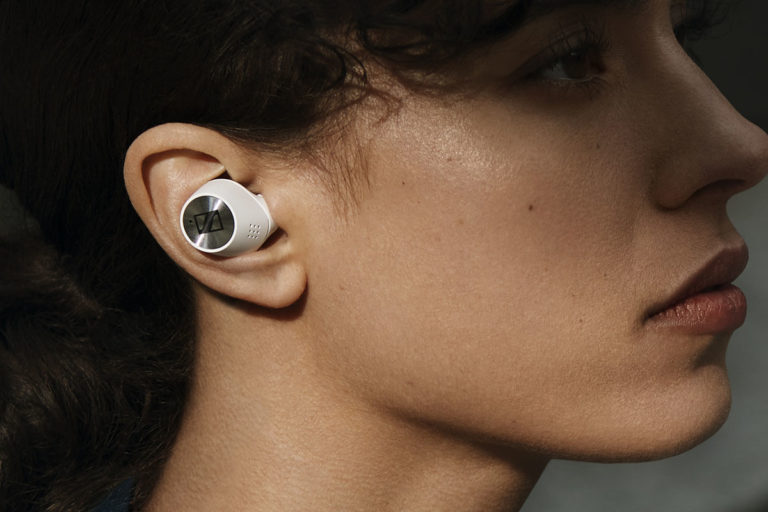 The Sennheiser Momentum True Wireless 2 earphones are a pair of small Bluetooth buds that, of course, come with a charging, carry case. The case is compact and, although it’s a hard case, it’s finished in a slightly tweedy cloth. It weighs 70.5 grams including the buds and measures 77mm by 44mm by 35mm. Each of the buds weighs just 6.2 grams.

There are no wings or fins on the buds. They do come with four sizes of silicone tips. With their low weight, I found that they stayed firmly in my ears without assistance, even when I went on bike rides. The buds are rated up to 7 hours of playtime, which extends to 28 hours if you count the three recharges available in the case. The case is charged via a USB Type-C socket on the rear. Next to that is a LED indicator and a little press button. Press the button and a colour code on the LED gives an indication of charge level. The buds snap nicely into place with a magnetic pull. It takes an hour and a half to fully charge the buds, but only ten minutes to give an hour-and-a-half of play time.

They use 7mm dynamic drivers, clearly premium ones from Sennheiser which rates the playback frequency response at 5 to 21,000 hertz. The buds support Bluetooth 5.1 and the SBC, AAC and aptX codecs. The latter two allow higher quality with, respectively, iOS devices and higher-end Android devices.

And, of course, they offer active noise cancellation. Plus, you can switch them to pass outside sound through to your ears using their built-in microphones.

There wasn’t much to setting up the Sennheiser Momentum True Wireless 2 earphones. You just connect them to the Bluetooth of your phone in the usual way. But it’s well worth installing the Sennheiser Smart Control app. When I first connected the earphones to my phone, the connection was pretty flaky, dropping out with the slightest wrong turn of the head. But the app updated their software and the connection thereafter was solid and effective.

Very solid. With my usual walking-away-from-the-phone protocol, the connection remained perfect out beyond 25 metres, regardless of my head orientation.

The connection appears to be right earbud only to the phone. When I’d pop that one into the case, the left earbud would announce that loss of a connecton. On Android phones the battery level is shown by an icon in the phone’s status bar.

The controls are touch sensitive on the back of both earphones. I confess that I’m not keen on touch controls. Give me a lightly-sprung press-button any day. But the touch controls on the Sennheiser Momentum True Wireless 2 earphones are done right.

First, they responded best to a leisurely touch rather than a sharp tap. Second, double taps could be fairly well-spaced in time, and that made doing things like skipping track easy. Third, a soft tone sounded to acknowledge each tap. Finally, for each subsequent tap in a multi-tap sequence, the pitch of the tone went up. All that gave assurance that the Sennheiser Momentum True Wireless 2 earphones were registering the taps correctly.

Initially the controls were a little disconcerting because the main play/pause control was on the left rather than the right, which is the opposite of how most brands do it. But you can – and I did – reassign the controls using the app. I’d guess most people would be happy with the default layout.

In addition to play/pause, answer/hang up and track skipping, the controls support volume up and down, noise cancellation on or off and ambient noise on or off. That’s a lot of control to exercise with just two touch controls, but it was effective and highly usable.

All that worked well as a practical matter. What also worked well on the Sennheiser Momentum True Wireless 2 earphones was the audio performance. The sound quality was as good as it gets with true wireless earphones. That’s what I meant earlier about these earphones preserving the essential character of the older model.

The tonal balance was very accurate and very natural. There was none of the unnatural zing often delivered by earbuds, yet plenty of detail remained, with nice handling of cymbals. The bass in Billie Eilish’s When We All Fall Asleep, Where Do We Go? was at the correct level, rather than overblown in the manner of too many systems, and it was well extended, reaching down deeply and impressively. Classical music was smooth and realistic. Tchaikovsky’s Andante Cantabile for Cello & Orchestra, performed by Pieter Wispelwey and the Deutsche Kammerphilharmonie Bremen, which I ripped from the CD layer of an audiophile SACD, was a delight to my ears.

The app includes an EQ adjustment, but I wasn’t tempted to use it given the excellent tonal balance of the earphones as delivered.

The spoken word in podcasts was clean and coherent. Phone calls worked well, both in listening and in the other end being able to hear me clearly.

I’d characterise the noise cancellation provided by the Sennheiser Momentum True Wireless 2 earphones as mild. It definitely worked and, particularly in already fairly quiet environments, it reduced the level of distracting noise. Using my loud onboard airplane recordings, the earphones took the edge off, mostly in the midrange to upper midrange, while leaving the bass noise fairly loud. That certainly improved the ability to hear and understand the program material being played through the earphones.

There was no noise nor any weird sensations generated by the noise cancellation when I was moving around. But when I dropped a piece of cutlery on my kitchen’s granite benchtop, the sound of that threw the noise cancellation circuitry into overdrive. It sounded as though the driver had bottomed out. I was unable to reproduce the effect with any other environmental noises, so it wasn’t really a problem.

The Sennheiser Momentum True Wireless 2 earphones deliver great sound and a useful amount of active noise reduction in a reliable, easy to use package. Highly recommended.