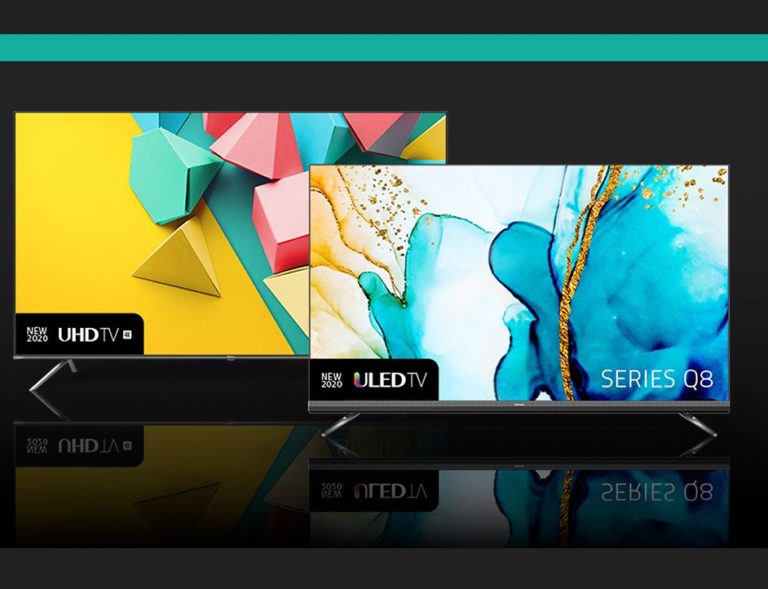 The first of the 2020 Hisense Q8 4K ULED and S8 4K UHD/LED televisions will be arriving in-store in May.

The naming convention for the Hisense Q8 4K ULED and S8 4K UHD/LED is different than the 4K Quantum Dot (QLED) Series-7 (R7) and Series-8 (R8). For the most part, the model name reflects the key features you’ll get such as next-generation panel features such as full-array local dimming (FALD) PRO.

What is FALD PRO on the Q8?

A typical LCD TV has edge lighting – usually a row of LEDs along the bottom edge of the screen and optics that distribute that light around the panel. If you see the term ‘local dimming’ on its own, you know it’s the edge-lit type. The downside is that you can’t get sufficient brightness (nits) or contrast (the difference between pure black and white measured as a ratio like 1000:1) across the panel, so its really hard to support proper High Dynamic Range (HDR), let alone HDR10/+ or the ultimate – Dolby Vision.

Full-Array Local Dimming (FALD PRO), on the other hand, uses hundreds of LEDs (and Hisense will not reveal how many) behind the panel, rather than on its edge. The image processor chip addresses each one and can turn it on/off (some can dim as well). The result is increased brightness, higher contrast (LCD can not do pure black) and more dimming zones to help HDR and Dolby Vision.

What is Quantum Dot on the Q8?

Technically it’s a layer of different sized nano-crystals (immensely small) that reside over the LCD gates. As light hits the different size crystals, they glow in a specific colour (wavelength). Samsung pioneered it, and its high-level QLED TVs are excellent – giving OLED a run for its money.

Using this technology, the 2020 Hisense Q8 can create over 1 billion colours/shades. This and FALD PRO together means it is fully Dolby Vision approved. It also uses dynamic metadata to optimise the colour, contrast and brightness settings of what you’re watching automatically — frame by frame (older versions used static metadata, adjusting only once for the show).

And Hisense has improved the anti-glare screen claiming to absorb 98% of incoming light – a criticism we had of the 2019 models.

Hisense developed its own TV operating system. It would be trite to say that Samsung Tizen, Sony Android TV, LG WebOS are better – or worse. TV OS is what they is! We had a first look at VIDAA 4.0 at CES Las Vegas earlier this year, and found it to be cleaner (more organised), with enhanced AI/universal search and streaming including Netflix, YouTube, Stan, Amazon Prime Video and ABC iView.

For more, check out our Hisense 2020 TV range wrap up in the video below, or fast forward to the 5 minute mark to see VIDAA in action.

We are yet to review the range so we can’t comment on the next-gen QLED (Quantum Dot) FALD panel except to say that we were pretty impressed with lower specified, edge-lit 2019 R8 (GadgetGuy review here). The R9 had FALD but never made it to Australia.

It has Dolby Vision (backwards compatible with HDR/10), Dolby Atmos (decoding on TV to downmix to its speakers or passthrough to an Atmos soundbar).

Other features include (we are yet to receive a spec sheet):

4K at a very reasonable price!

Hisense’s new UHD family of TVs are more value-focused but still come with features you’d find on more expensive models. We’ve listed these below. The 85 and 100” variants also get Dolby Vision HDR and will be available from mid-June/July rather than May.

Good value for a mainstream 4K unit. But I suspect TV aficionados will go straight to the Q8 4K QLED for a superior picture and sound experience.

We’ll be sure to update this article once more specs and features become available.