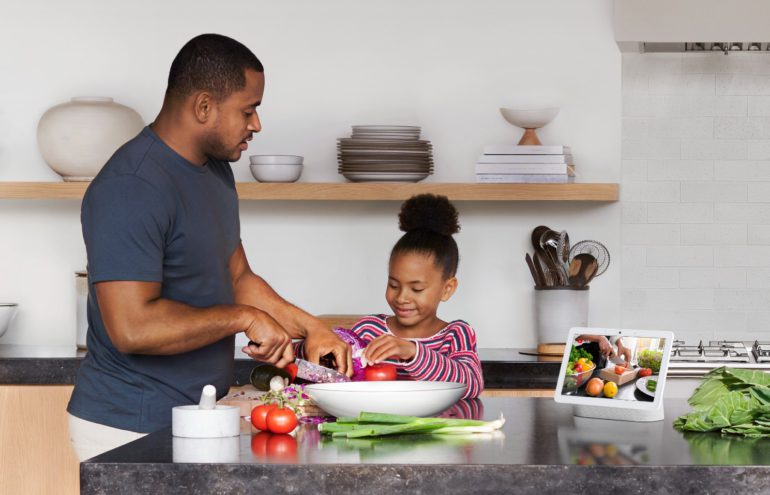 With “OK Google” the catch cry of gadget lovers across the country, what are your options if you want to add Google Assistant smart speakers to your home? These days there’s a smartphone in practically every pocket. Smart speakers are the Next Big Thing when it comes to tightly integrating smart tech into our lives. They sometimes struggle to walk that line between serving our needs and respecting our privacy, but many Australians are still happy to invite smart speakers and smart screens into their homes.

Three smart assistants are battling for our attention: Apple’s Siri, Amazon’s Alexa and Google’s Google Assistant. While Alexa dominates in the US, Google Assistant lives on the lion’s share of smart speakers in Australian homes, according to the Smart Audio report Australia 2021.

Apple’s iPhone accounts for around 45% of Australia’s smartphones, with the other 55% Android devices. Yet clearly, Apple’s HomePod and HomePod mini smart speakers have failed to make similar inroads into our lives.

In Australia, 24% of people own a Google smart speaker. Meanwhile, only 3% own an Amazon speaker, and a mere 1% own an Apple speaker. Of those homes with a smart speaker, 45% own more than one.

One thing working in Google and Amazon’s favour is that they offer a wider choice of smart devices than Apple. And at a wider range of price points.

Google Assistant and Alexa also work on a broad range of third-party speakers. Apple is far more protective when it comes to Siri.

Google dominates locally because Amazon tends to treat Australia as an afterthought when releasing new products and services. Google has also led Amazon when it comes to localisation and interacting with more Australian services.

OK Google, what are my smart speaker options?

The tiny $69 Google Nest Mini is the cheapest and easiest way for Australians to get their hands on Google Assistant smart speakers.

It’s useful for talking to Google Assistant, but this pint-sized speaker doesn’t really cut it when it comes to playing music. The Mini might make do as a bathroom speaker, which you can sing along with in the shower. Unfortunately, it lacks the audio chops to satisfy elsewhere in the home, unless you’re only interested in listening to podcasts and talk-back radio.

The next step up is the $149 Google Nest Audio. It packs extra low-end grunt to do more justice to your favourite music. The Nest Audio is fine for the kitchen bench, but it’s still not powerful enough to really rock a large room.

Interestingly, Google has discontinued its beefy $549 Google Home Max. Catching the ear of audiophiles, it stacked up well against the highly-respected Sonos multi-room speaker range and Apple HomePod.

The fact that Apple has also retired its original high-end $469 HomePod in favour of the tiny $149 HomePod Mini suggests that the tech giants are turning their backs on the high-end audio market. Amazon still sells high-end smart speakers, but its main focus remains on the medium and low-end.

Keep in mind these are all single speakers, but you can link two matching speakers to create a stereo pair.

OK Google, what are my smart screen options?

Google’s smart screens offer all the same benefits as Google Assistant smart speakers, with the added ability to both show and tell. They can also double as a digital photo frame, scrolling through your happy snaps when sitting idle.

With a 7-inch screen, the $149 Google Nest Hub is at home on the kitchen bench. It also acts as a decent alarm clock, even if it’s a little big for some bedside tables.

If you’re after more screen real estate, look to the 10-inch $349 Google Nest Hub Max. It adds a camera for making video calls.

OK Google, what are my third-party options?

Google allows third-party hardware makers to integrate its smart assistant into their devices. This means that Google Assistant smart speakers are available in all shapes and sizes.

One of the problems with using Google Assistant on third-party smart speakers and screens is that functionality and interoperability can lag behind Google’s own smart devices. You’re at the mercy of each vendor’s software updates. This means Google Assistant’s capabilities on non-Google hardware is in a constant state of flux.

If you’re interested in multi-room audio and care about sound quality, then it’s hard to go past the slick Sonos ecosystem. Sonos’ Google Assistant integration was initially quite limited. It has improved considerably in the last 12 months but still has its moments of incompetence.

When it comes to outdoor speakers, you’ve got the Sonos Roam and Sonos Move, with other solid performers, including the Bose Portable Home Speaker and B&O Beoplay P6. Most portable speakers don’t have Google Assistant built-in but let you access Google Assistant via your smartphone.

When it comes to third-party smart screens which support Google Assistant, take a look at Lenovo’s 7 and 10-inch smart displays as well as its 4-inch Lenovo Smart Clock. Other options include the JBL Link View.